Jeff Goldblum is an American film, television, and stage actor. A student of New York’s ‘Sanford Meisner,’ he began his acting career with theater. He started his acting career in films with ‘Death Wish’ where he played ‘Freak #1,’ a rapist. During this time, he also appeared on the small screen with several series and movies. He made his small screen debut with his role as ‘Protector’ in an episode of ‘Columbo.’ After doing small roles in different films, he collected favorable reviews for his role in ‘The Big Chill.’ Afterward, he was offered good roles in films like ‘Into the Night’ and ‘Silverado.’

Thereafter, he steadily moved ahead in his film race with major hits like ‘The Fly,’ ‘Jurassic Park,’ ‘Nine Months,’ ‘Independence Day,’ ‘The Lost World: Jurassic Park,’ and ‘Morning Glory.’ He got an ‘Academy Award’ nomination for his short live-action film ‘Little Surprises.’ While doing films, he continued appearing in several TV series. His performance as ‘Scott Wooley’ in three episodes of the series ‘Will & Grace’ earned him a nomination for ‘Primetime Emmy Award’ for ‘Outstanding Guest Actor in a Comedy Series.’ He appeared as ‘Detective Zach Nichols’ in the series ‘Law & Order: Criminal Intent’ for its 8th and 9th seasons. He is also a well-known theatre personality. He has also given his voice for several videogames, including ‘Independence Day’ and ‘Jurassic Park: Chaos Island.’

Jeff Goldblum is a film, TV and stage actor known for his roles in work like ‘The Fly,’ ‘Jurassic Park,’ ‘Igby Goes Down’ and ‘Law & Order: Criminal Intent.’ Jeff Goldblum studied acting with Sanford Meisner in New York before embarking on a big-screen career. He has starred in several dozen films, with prominent roles in works like The Fly, Jurassic Park, Independence Day, and Morning Glory. 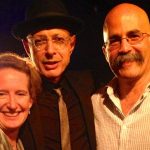 Jeff Goldblum With Father And Mother

Brands Represented: Jeff appeared in TV commercials on Macintosh Computers in 1998, iMac computer in 2000, Apple computers in 2003, Holsten Pils lager beer, Toyota autos in 2003, Irish Lottery in June 2011, Currys Christmas ad campaign in November 2015, Apartments.com in 2015, etc. Jeff also lent his voice for some of the commercials for U.S. Toyota and Procter & Gamble’s facial cream line.
Best Known for:  Movies like The Tall Guy (1989), Deep Cover (1992), Jurassic Park (1993), Powder (1995), Independence Day (1996), The Lost World: Jurassic Park (1997) and The Prince of Egypt (1998), and Independence Day: Resurgence (2016).
Debut Film: He was first seen in an action movie Death Wish in 1974 in which he played a thug.
Debut TV Show: In 1975, he made his first television appearance in the series Columbo as Protector in just one episode entitled “A Case of Immunity”.
Debut Broadway Performance: Jeff’s Broadway debut was in the musical Two Gentlemen of Verona in 2008.
Health Trainer: Jeff Goldblum feels that the right exercise and diet are the key ingredients of a fit life and he believes in aging gracefully. He became a father at the age of 62 and feels that it is best as one gets to walk around. He does chest presses with his son. For his diet, he prefers antioxidant-rich fruits, vegetables, lean protein, and whole grains and completely avoids fatty, fried, and sugar enriched foods.

Jeff Goldblum was born to Jewish parents on October 22, 1952, in West Homestead, Pennsylvania. His mother, Shirley Jane Goldblum, was a radio broadcaster who later ran a kitchen equipment and appliances sales firm, and his father, Harold Leonard Goldblum, was a medical doctor and major in the U.S. Army during World War II. His family is from Russia and the Austro-Hungarian Empire, with roots in Starobin and Zolochiv. He has a sister, Pamela, and an elder brother, Lee. His other brother, Rick, whom Goldblum has described as a “kind of hero of mine”, died in 1971 at age 23 whilst traveling in Morocco, having contracted dysentery which led to kidney failure. Goldblum credits his interest in jazz music to Rick’s influence while they were growing up. He has stated that his brother’s early death made him “more focused” and gave him a determination to “save me and survive”. 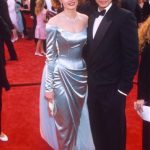 During his childhood, Goldblum belonged to an Orthodox synagogue and had a bar mitzvah ceremony. His parents were interested in show business. His father nearly studied acting before deciding to pursue medical studies, going on to become Chief of Medicine at a Pittsburgh hospital. Goldblum moved to New York City at 17 to become an actor. He worked on the stage and studied acting at the renowned Neighborhood Playhouse under the guidance of acting coach Sanford Meisner. He made his Broadway debut in the Tony Award-winning musical Two Gentlemen of Verona. He is an accomplished jazz pianist and declared that if he did not act, he would have become a professional musician. 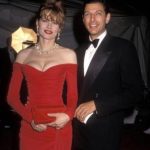 Jeff Goldblum’s estimated Net Worth, Salary, Income, Cars, Lifestyles & much more details has been updated below. Let’s check, How Rich is Jeff Goldblum in 2022? 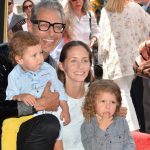 Jeff Goldblum With His Third Wife Emilie And Children

Goldblum went on to star with Geena Davis in the horror-comedy Transylvania 6-5000 (1985). The two embarked on a romance, eventually tying the knot in 1987. 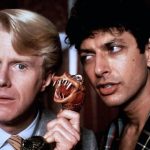 The couple again worked together in David Cronenberg’s remake of the horror classic The Fly (1986). Goldblum earned raves for his portrayal of a scientist who undergoes a terrifying bodily and psychological transformation. Davis and Goldblum next co-starred together in the brightly hued extraterrestrial comedy Earth Girls Are Easy (1989). The two divorced in 1990 and remain friends. 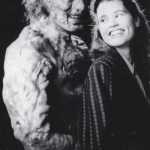 Geena Davis in The Fly With Goldblum 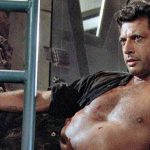 Continuing to explore a variety of parts, Goldblum starred in two of the biggest blockbusters of the 1990s. He portrayed yet another scientist, Ian Malcolm, in Steven Spielberg’s Jurassic Park (1993), and reprised the part in the 1997 sequel The Lost World. He dated his Jurassic Park co-star Laura Dern for a time, as well.

In 1996, Goldblum was featured as a world-saving computer whiz in the sci-fi/action film Independence Day, co-starring Will Smith. The film grossed more than $800 million worldwide. During the mid-1990s, Goldblum earned an Academy Award nomination for his work in creating the live-action film short Little Surprises.

Goldblum didn’t continue down the blockbuster path, instead of taking on a mix of roles that included indie fare, comedies, voiceover work, and thrillers. He co-starred with Susan Sarandon in the critically acclaimed, cynical comedy Igby Goes Down (2002), and portrayed a rival, genteel oceanographer in The Life Aquatic With Steve Zissou (2004). Other films on his long roster have included Fay Grim (2007), The Switch (2010), and Morning Glory (2010).

Comeback on the small screen, Goldblum was nominated for a 2005 Emmy for his guest-starring role on NBC’s Will & Grace and in 2009, he joined the cast of Law & Order: Criminal Intent as Detective Zack Nichols. He is well known for his stage work as well, having performed in works like The Pillowman, Seminar, and a London revival of Neil Simon’s The Prisoner of Second Avenue.

In 2017, Goldblum moved to the Marvel Comics Cinematic Universe, starring in Thor: Ragnorak as The Grandmaster.

In 2017, He reprised his role as Dr. Ian Malcolm from Jurassic Park for the latest franchise installment, Jurassic World: Fallen Kingdom, and rejoined The Life Aquatic director Wes Anderson to voice a character for Isle of Dogs.

‘The World According to Jeff Goldblum’

In late 2019, Goldblum embarked on a new venture with the Disney and streaming service to launch The World According to Jeff Goldblum. The documentary series has the actor touring the country to learn about topics that have fascinated him through his life, from the process of making sneakers to an exploration of the tattoo community, while showcasing his trademark quirky sense of humor. 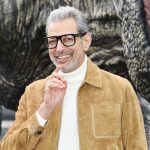 Some Known Facts About Jeff Goldblum

How Much Is Jeff Goldblum Worth?

Jeff Goldblum Is An American Actor Who Has A Net Worth Of $40 Million. Jeff Goldblum Has Starred In Some Of The Biggest Blockbusters Of All Time.

Jeff Goldblum Wants You To Know That He Likes To Be Called “Daddy.” He Also Doesn’t Mind If You Call Him “Zaddy.” In Fact, He Might Like It Even More. But, Like, Not In A Creepy Way (We Hope).

No, Jeff Goldblum Is Not Vegan. He Was Rumored To Be Vegan Because He Chose To Eat Vegan Wings On The Show Hot Ones And Was Spotted At A Veggie Grill By Kevin Smith.