Gauhar Khan (also known as Gauahar Khan, born 23 August 1983) is an Indian model and actress. After pursuing modeling, she made her acting debut with Yash Raj Films’ Rocket Singh: Salesman of the Year (2009). Khan also starred in films such as the action thriller Game (2011), the revenge drama Ishaqzaade (2012), the suspense thriller Fever (2016), the romantic comedy Badrinath Ki Dulhania (2017) and the Indian period drama Begum Jaan (2017). Gauhar Khan was born on August 23, 1983, in a Muslim family in Pune, Maharashtra. She completed her schooling from Mount Carmel Convent School, Pune.

Khan has modeled for Manish Malhotra, Ritu Kumar, Payal Jain, and Neeta Lulla. She has also acted in numerous television ads such as Ford Ikon, Bajaj Auto, Opel Car, and Tanishq jewelry. In 2002, at the age of 18, she participated in Femina Miss India contest where she came fourth and won the Miss Talented title. Later that year, she represented India in the Miss International contest. Khan appeared in a small role in movie Miss India: 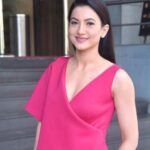 The Mystery as a model participant. She also appeared in a couple of music videos of which “Hawa Mein Udati Jaaye” by Bombay Vikings became hugely popular. She has anchored the film gossip show Page 3 on Zoom Television. In 2009, she participated in the celebrity dance show, Jhalak Dikhhla Jaa (season 3) where she became the first runner up of the show.

She made her acting debut in the 2009 Yash Raj Films production Rocket Singh: Salesman of the Year. Anupama Chopra said, “Gauhar was a fashionable, ambitious and smart receptionist, she was sharply etched and memorable as Koena in the film”. Namrata Joshi from Outlook India stated that “Leading the pack is Gauhar Khan as the feisty office secretary. Gauhar is a colorful character in the film who played too nice.”

Khan next appeared as outspoken and rebellious Samara Shroff in the action thriller Game (2011). NDTV said that “Gauhar as the loyal secretary Samara is nicely outfitted.” 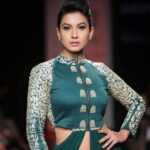 Khan played Chand Bibi in the 2012 romantic drama Ishaqzaade, in which she also did two item numbers “Jhalla Walla” and “Chokra Jawaan”. Shomini Sen of Zee News stated that “Gauhar as a kind-hearted prostitute Chand sizzles in two songs. It is a pity that she is used so less in the film.” Mrigank Dhaniwala from Koimoi stated, “Gauhar, who plays courtesan Chand, does very well.” Taran Adarsh said, “Gauhar is lovely in a special role. Also, she dances very well in the two tracks.”

In 2013, Khan became a celebrity contestant in Colors TV’s popular show Bigg Boss, an Indian version of the reality TV show Big Brother. She survived for full 15 weeks and has emerged as the winner in December 2013 defeating actress Tanishaa Mukerji. On Day 43, Gauhar took an exit after her boyfriend Kushal Tandon was asked to leave after he hit VJ Andy. A day later she returned to the house.

In May 2014, Khan participated in Colors TV’s stunt show Fear Factor: Khatron Ke Khiladi in its Fifth Season along with Kushal Tandon.

In September 2014, Khan hosted Star Plus’s singing reality show India’s Raw Star. On 30 November 2014, Khan was slapped during the shooting of a singing reality show called India’s Raw Star by a member of the audience who admonished her for wearing a short dress. Police arrested 24-year-old Akil Malik for attacking the actress at show’s studio in Mumbai. They quoted the man as telling Khan that “being a Muslim woman, she should not have worn such a short dress”. He was later produced in court on 1 December 2014.

In June 2019, Khan appeared in the Indian version of The Office, an adaptation of the hit BBC series of the same name. The show released on streaming service Hotstar on June 28, 2019. Gauhar plays the character of Riya Pahwa, who is the boss of the lead character Jagadeep Chadda.

Some known facts about Gauhar Khan

Where is Gauhar Khan from?
Pune
Who is the sister of Gauhar Khan?
Nigaar Khan
What is the age of Gauhar Khan?
37 years (23 August 1983)
Why did Kushal and Gauhar break up?
A day after TV actor Kushal Tandon and Gauahar Khan announced their breakup, reports suggest that the main reason for their separation was the Ishaqzaade-fame dancer-actor’s demand that Kushal should ‘convert’ to her religion.
Is Gauhar Khan winner of Bigg Boss?
Bigg Boss grand finale winner and actress Gauhar Khan said she was not sure of victory when she was pitted against co-contestant Tanishaa Mukherjee after other finalists Sangram Singh and Ajaz Khan had bowed out of the contest. I wanted to win the show, but I did not expect it,” Gauhar told PTI.