Ed Helms is an American actor predominantly known for his comic roles. His most popular works include the television series ‘The Daily Show’, ‘The Office’ and ‘The Hangover’ feature film trilogy. A graduate in film theory and technology, he started his career doing standup comedy and as a writer. Simultaneously he also began working on recording voice-over clips which later led him to work in acting. Though initially, he found work in television series, he soon began working on minor roles in feature films as well. Apart from acting, he has also co-written and produced films as part of his career. Ed Helms Movies And Tv Shows.

His notable projects also include lending his voice for several animated feature films. His performances have earned him awards like the Screen Actors Guild Award and the Teen Choice Award. In 2013, he established his own production company, ‘Pacific Electric Picture Company’. Ed Helms is also part of a music band named ‘The Lonesome Trio’. He has made cameo appearances in several music videos of bands like Mumford & Sons and Maroon 5. He was awarded an honorary degree – Doctorate of Fine Arts from the Knox College, Illinois. 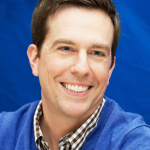 Ed Helms was born on January 24, 1974, in Atlanta, Georgia. He was born to John Helms and Pamela Parker. He has a sister named Susan Carol Helms Daley and a brother named John Paxton Helms. Helms pursued theatrical arts in high school and played guitar before going on to attend Oberlin College in Ohio. He has two siblings, an older sister named Susan Carol Helms and a brother named John Paxton Helms. At the age of 14, he underwent a major surgery to treat a severe case of the heart murmur. He switched from being a geology major to focus on cinema, graduating with a Bachelor of Arts in film theory and technology in 1996.

After Oberlin, he moved to New York City, where he worked as a video editor while also doing stand-up comedy and improv, including a stint with the city’s Upright Citizens Brigade Theatre. He eventually quit editing and did commercial voiceover work. During college, Helms made time for performance pursuits, studying improv and singing in the acapella group The Obertones. To this day, Helms continues to enjoy musical pursuits by co-presenting the L.A. Bluegrass Situation, an annual festival that hosts bluegrass/Americana performances from a variety of artists. 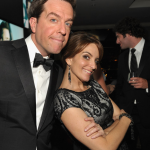 Ed Helms appeared on “Jimmy Kimmel Live!” Tuesday with a hilarious story about his falsely rumored affair with Demi Moore. Ed Helms, “The Office” alum who stars with Moore in the new comedy “Corporate Animals,” told host Kimmel he got a phone call from his publicist inquiring about a tabloid report that Helms and Moore were involved in. Helms assured his rep that it was not true but went into a tizzy about how to explain the scuttlebutt to his wife.

When he returned to where his family was staying on vacation, both his wife and his wife’s mother were waiting for him. Said Ed Helms: “Before I can say anything, they go, ’Demi Moore, high five! Can you believe this tabloid thought that you and Demi Moore could be a couple?”

According to Woodgram, actor/ comedian Ed Helms has an estimated net worth of 20 million USD. He is present in the industry since 2002 and has garnered an impressive amount of fortune from his comedian role and production activities. In addition to the monetary value of net worth, Helms has also amassed the number of nominations for his contribution and is the winner of the Teen Choice Award for the category “Choice Movie: Hissy Fit.” 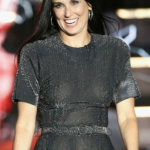 Some Known Facts About Ed Helms

Why Did Ed Helms Leave The Office?

Does Ed Helms Have A Kid?

Helms Is The Youngest Of Three Children, Having A Sister, Susan Carol Helms, And A Brother, Paxton Helms, Who Is An Immersion World Geography Teacher At Gunston Middle School In Virginia.

Did Ed Helms Go To College?

Is Ed Helms In Pitch Perfect?

He’s Actually Pitch Perfect, Like His Character Andy Bernard On The Office, Helms Was A Member Of An A Cappella Group In College.

Did Andy Really Go To Cornell?

Andy Bernard Went To Cornell University (Graduating In 1995 With An Unspecified Bachelor Of Arts) And Is Smug About It.

Did Andy Bernard Go To Cornell?

He Quits His Job At Dunder Mifflin In Order To Go Into Show Business. He Is Now An Admissions Counselor At Cornell University. When Andy Was First Introduced, It Was Revealed That Andy Had Issues With Anger Management. He Frequently Mentions That He Went To Cornell University (See Andy Bernard’s Academic Career).