Drew Carey is a famous American Television comedian, actor and sports show host. He initially made a name for himself in stand-up comedy while serving in the US Marine Corps and later started his own sitcom, ‘The Drew Carey Show’. He also hosted the American version of the show, ’Whose Line is it Anyway’, which was aired on ABC. He has since appeared in many television series, movies, music videos, and even a computer game. He is known for his love for sports and has worked as a photographer with the US National Soccer Team. He has hosted the game show, ‘The Price is Right’ since 2007 on CBS. He is also a minority owner of the soccer team, ‘Seattle Sounders FC’.

He is outspoken and has expressed his political philosophy by saying, “I believe the answers to all the problems we face as a society won’t come from Washington, it will come from us. So the way we decide to live and our decisions about what we buy or don’t are much more important than who we vote for”. He openly expressed dissatisfaction with the Bush administration and their approach to the Iraq War. He supported the Libertarian Party and in 2016 was made an Honorary Chair for the campaign in California.

Comedian Drew Carey came to national attention with his hit sitcom ‘The Drew Carey Show’ before becoming the host of ‘The Price Is Right. Drew Carey (born May 23, 1958) battled depression as a young adult. In the Marine Corps Reserves, he found much-needed structure as well as his signature stylebuzz-cut hair and heavy glasses. After the Corps, Carey became a comedian, and his stand-up act led to a primetime sitcom, The Drew Carey Show. He’s also been a popular host of the improv comedy show Whose Line Is It Anyway? and the game shows The Price Is Right. Carey was born on May 23, 1958. He is the youngest of Lewis and Beulah Carey’s three sons (Neil, born 1946 and Roger, born 1952) and raised in the Old Brooklyn neighborhood of Cleveland, Ohio. When Drew was eight years old, his father died from a heart attack. Drew played the cornet and trumpet in the marching band of James Ford Rhodes High School, from which he graduated in 1975.

He continued on to college at Kent State University (KSU) and was a part of the Delta Tau Delta Fraternity. He was expelled twice for poor academic performance. He left KSU after three years. Upon leaving the university, Carey enlisted into the United States Marine Corps Reserve in 1980 and served for six years as a field radio operator in the 25th Marine Regiment in Ohio. He moved to Las Vegas for a few months in 1983, and for a short time worked as a bank teller and a waiter at Denny’s. 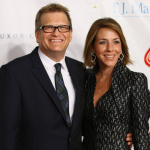 Drew Carey With His Financee

Drew Carey is an American actor, comedian and television host who has a net worth of $165 million. He is most widely recognized for his role on “The Drew Carey Show”, and as the host of “The Price is Right”. During his time on The Drew Carey Show, he was one of the highest-paid entertainers in the world, earning the inflation-adjusted equivalent of $1 million per episode.

In 1980, while visiting his brother Neal in San Diego, Carey signed himself up for the Marine Corps Reserve, believing the armed forces would provide the structure he had been craving. During his six-year tenure, Carey developed physically and mentally; gained self-assurance and direction; and paid his own way by working as a waiter and taking on odd jobs. He was so defined by this period of his life that it helped to develop his signature look—a military buzz cut and thick, black, standard-issue glasses—as well as his Libertarian leanings. 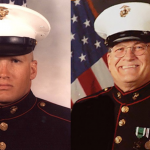 Drew Carey Was In US Marines For 6 Years

In 1986, childhood friend, actor, and radio personality David Lawrence contacted Carey. At the time, Lawrence was a morning radio DJ, and he asked Carey to help him write comedy bits for the show. Carey’s contributions to the show buoyed his confidence even further, and with Lawrence’s encouragement, Carey began to make the rounds on the local comedy circuit. By April, he’d won a competition at the Cleveland Comedy Club and began working as their regular emcee. In the following year, he made two notable appearances on the TV talent show, Star Search. Over the next few years, he continued to perform as much as possible, often shuttling between Ohio and Los Angeles. His persistence paid off, and in 1991 he bolstered his career with a celebrity-making appearance on The Tonight Show. The audience loved Carey, and his performance earned the respect of host Johnny Carson. 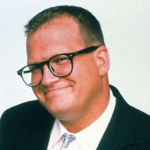 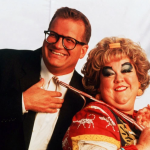 The Drew Carey Show and The Price Is Right

After multiple cable specials and a few small film and television roles, ABC gave Carey his shot at an eponymous sitcom. He was cast as the average, amiable, assistant director of personnel at a department store in Cleveland, Ohio. Filled with everyman humor, a likable ensemble cast, and several forays into musical theater, The Drew Carey Show debuted in 1995. By its second season, it was a rating favorite.

The following year, Carey began hosting the American version of the wildly popular British improv show, Whose Line Is It Anyway? which featured comedic luminaries like Ryan Stiles, Colin Mochrie, and Wayne Brady. Carey took members of this talented collective on the road in 2001, billing the group as “The Improv All-Stars.” In addition to these cabaret performances, his hosting duties, and multiple big-screen appearances, Carey was chosen as the host for the 2002 White House Correspondents Dinner, a prestigious and much-envied post.

When The Drew Carey Show wrapped in 2004, and Carey’s tenure with Whose Line Is It Anyway? ended in 2006, the comedian took time to develop a passion for sports photography specifically, soccer. He didn’t stray far from the small screen, however. In 2007, he was tapped to helm the CBS game show, The Power of 10, and handpicked to replace Bob Barker as the host of the long-running The Price Is Right. That same year, he proposed to his girlfriend, culinary-school graduate Nicole Jaracz. They called off their engagement in 2012.

Some Known Facts About Drew Carey

How Much Is Drew Carey Worth?

How Much Is Drew Carey Paid?

Does Drew Carey Have A Wife?

Nicole And Connor Have Appeared Alongside Carey On The Price Is Right Several Times. Although He Proposed To Jaracz In 2007, The Pair Did Not Wed, As The Engagement Was Called Off In January 2012. Carey Announced His Engagement To Therapist Amie Harwick In January 2018, But They Later Split.

How Much Does Drew Carey Make On The Price Be Right?

Drew Carey: Funnyman Drew Carey, The Current Host Of “The Price Is Right” May Have Punchlines Coming Out The Wazoo, But He’s Not Very Forthcoming About His Annual Salary. The Generally Accepted Figure Is About $9 Million.