Terry Crews is a former American football player. He became a well-known actor for his roles in several popular television sitcoms and game shows besides films. Crews played in the ‘National Football League’ as a defensive end and linebacker. He ended his rather mediocre career in football to pursue an acting career that proved more profitable. He made his debut in the early 2000s and followed it up with quite a few other appearances that got him public attention and recognition. He also appeared in a number of television shows, including a highly-popular reality show and his own reality series starring his entire family.

As a model in television commercials for a popular brand of aftershave, he won the hearts of a lot of people. Crews have developed as a vocal supporter for women’s rights and are an activist against sexual horrors, striking an emotional chord with his audience by sharing the experience of abuse that his family went through at the hands of his cruel father. The ‘Time’ magazine included him in the list of people named ‘Person of the Year’ in 2017 for his courage in sharing with the public his experience of sexual assault. Personal Fitness: Terry Crews is a big fan of making a balance in his workout routines. He told that depending wholly on lifting heavy doesn’t make you healthy. So, he tells starting his day by running, a minimum of 4 miles daily. On some days, he follows up running with cycling for a couple of miles. He admits that this routine is good for his heart and mind.

When we talk about the gym workout, he likes big lifts such as power cleans, squats, and bench presses. The big lifts shove up the testosterone level, which makes a huge difference for someone like Terry. Yet, he doesn’t go for one-rep-set style lifts as there is a serious threat of getting injured. Talk on his diet, he is a big fan of intermittent fasting. He takes around 3 to 4 meals in an 8-hour period. He doesn’t eat anything until 2 PM. His first meal comprises salad, bacon, steak, and omelet.

Terry was born July 30, 1968, in Flint, Michigan. His mother Patricia and father Terry Crews, Sr. His childhood was in a strict Christian household in Flint and was raised mainly by his mother. His father was an alcoholic person who was abusive to his mother. Terry received a flute from his great aunt and took lessons for eight years. 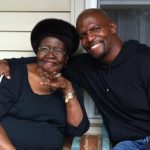 Terry Crews With His Mother

He has completed his high school diploma from Flint Southwestern, where he received a Chrysler-sponsored art scholarship at the Interlochen Center for the Arts in Interlochen, Michigan. His scholarship was followed by an Art Excellence scholarship and a full athletic scholarship for football at Western Michigan University in Kalamazoo, Michigan. He played as a defensive end for the WMU Broncos. He earned All-Conference honors and won the 1988 Mid-American Conference Championship.

He normally focuses on 9-12 exercises every time he works out. If you look at the routines, he also works a lot with Cardio workout. On Sundays, he has a day to choose between having a day of training or cardio. 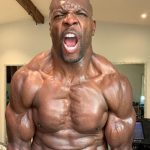 He likes to work out in the morning because it has a calming effect. When he prepared his role in Expendables, he included challenging free-weight exercises like power cleans, deadlifts, and squats that help in increasing his strength and muscle mass. He trained 5-6 days a week and used half-an-hour of cardio exercises for warming up. 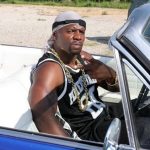 The couple started dating in 1989, even though King was convinced that they were never going to be anything more than friends. In 1990, they said I do, Crews was just 20 at the time. Now, they’ve been together for 29 years.

He got over the addiction and reconciled with his wife, Rebecca (age-54 years, born December 24, 1965). She was a former beauty queen and Christian recording artist, whom he has been married on July 29, 1990. The couple has five children: daughters Azriel, Tera, Wynfrey, and Naomi Burton and son Isaiah. 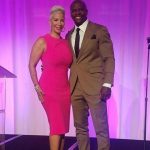 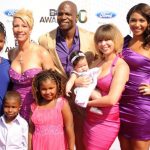 Terry Crews With Wife And Kids

While the couple is still married, it hasn’t been an easy road for them. In 2014, Crews admitted that he suffered from a long-standing p*rnography addiction that had a serious effect on his relationship.

In a Facebook video in which he discussed how he was addicted to p*rnography for years. He said, “My wife was literally like, ‘I don’t know you anymore, I’m out of here.’” He continued, “That changed me. I had to change because I realized this thing is a major, major problem.”

Terry Crews’ wife, Rebecca Crews, learned that she has stage 1 breast cancer just as the world began dealing with the global coronavirus pandemic. In the weeks since her diagnosis, the 54-year-old singer has undergone a double mastectomy and subsequent reconstructive surgery, which she is now recovering from at their home in Pasadena, California.

As a player of the WMU football team, He was a major force, earning all-conference honors as a defensive end and playing on the 1988 Mid-American Conference champion Broncos. In the 1991 NFL draft, the 6’2”, 245-pound Crews was drafted in the 11th round by the Los Angeles Rams.

He played two seasons with the Rams before becoming an NFL journeyman, playing with the San Diego Chargers (1993-94), Washington Redskins (1995) and Philadelphia Eagles (1996). He also managed to squeeze in a season with the Rhein Fire (Germany) in the World League of American Football.

During his football years, he also tapped his artistic talents. He creating a line of NFL-licensed lithographs for a national sports memorabilia company.

Crews retired from professional football in 1997. He shortly took on the role of T-Money on the TV action competition Battle Dome (1999). The subsequent year, he made his big-screen debut in The 6th Day, pursued by a string of small roles in such films as Friday After Next (2002), Serving Sara (2002) and Deliver Us From Eva (2003).

In the year 2005 Crews made a bigger sensation when he returned to the small screen, landing the reappearing role of Julius on Chris Rock’s comedy Everybody Hates Chris. With his face seen on TVs across the country, Crews began getting more film parts. His roles in White Chicks (2004), The Longest Yard (2005) and Norbit (2007) followed.

Crews soon began getting larger roles in high-profile movies such as Balls of Fury (2007), Get Smart (2008), Terminator Salvation (2009), The Expendables (2010) and Bridesmaids (2011). Crews also reprised his Expendables role as Hale Caesar in two sequels and a video game based on the series. Currently, he is appearing in the largest show America’s Got Talent.

The second decade of the 2000s has been a good one for Crews. He became a reality TV star in the BET show The Family Crews (2010-11), which featured his entire family. He also took on roles in three popular TV shows: Are We There Yet?, Arrested Development, and the Golden Globe-winning Brooklyn Nine-Nine.

In 2014 Crews also continued his movie work, starring in the Adam Sandler-Drew Barrymore comedy Blended, and he was named the host of the TV game show Who Wants to Be a Millionaire? With all of this work under his belt, however, Crews may still be best known for starring as the pumped-up spokesman in a string of popular Old Spice deodorant commercials. 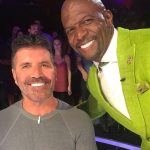 Terry Crews In America’s Got Talent With Simon

Along with supplying voiceover work for programs like American Dad! and the big screen’s Cloudy With a Chance of Meatballs 2 (2013), Crews appeared in the Marvel superhero flick Deadpool 2 (2018) as Bedlam. He also continued with TV hosting duties, helming the Netflix reality competition series Ultimate Beastmaster in 2017, and America’s Got Talent: The Champions in 2019.

‘Manhood’ Book on His Life

In 2014 Crews became an author with the release of his memoir Manhood: How to Be a Better Man Or Just Live With One. In the book, he details his childhood growing up in a strict Christian family with an alcoholic father and tells how he made his dreams of a career in Hollywood come true. He also confesses to an addiction to p*rnography that started at the age of 12, and how later in his life it almost ruined his marriage. 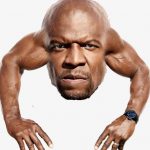 Did Terry Crews Play In The NFL?

He Played Two Seasons With The Rams Before Becoming An Nfl Journeyman, Playing With The San Diego Chargers (1993-94), Washington Redskins (1995) And Philadelphia Eagles (1996).

What Is Terry Crews Net Worth?

As Of 2022, Terry Crews’ Net Worth Is Estimated To Be Roughly $25 Million. He Has Earned His High Net Worth Through His Acting Career And As Voice Acting In Animated Films.

Is Terry Crews A Flutist?

A Flutist Is Someone Who Plays The Flute. Like Terry Crews! He Displayed His Musical Prowess On An Episode Of The Late Late Show With James Cordon.

What Ethnicity Is Terry Crews Wife?