Nora Fatehi is a well-known Moroccan Bollywood Dancer, Actress, and Model. She is currently active in the Hindi cinema. She gained popularity in Telugu cinema by doing item numbers in films Like Baahubali, Temper, and Kick 2. the Indian films. Nora Fatehi is chiefly known for her gorgeous look and glamorous style in the films. She is also an accomplished dancer and master in the belly dancing.

Nora Fatehi was born in an Islamic Arabic-Moroccan family on 6 February 1992 in Toronto, Ontario, Canada. But her family roots in India, as her mother is a third-generation Indian. There is not much information about Nora’s parents’ names. She has a younger brother named ‘Omar.’

Nora Fatehi is currently unmarried and her ex-boyfriend name is Angad Bedi who is an Indian actor. Before dating Angad, she was in a relationship with Varinder Ghuman (A bodybuilder) and Prince Narula who is an actor and Television personality. Nora Fatehi spent her childhood in Canada and did her schooling at Westview Centennial Secondary School, Toronto. Later, she joined York University, Toronto to pursue her graduation but due to some reasons, she dropped college. Then, she started learning belly dance by watching videos on the internet since her schooldays.

Afterward, Nora started doing modeling and signed with a model and talent agency ‘Orange Model Management’. Nora was sent to India for this model show. She worked in a various number of brands advertisements such as Mexitos Chips and Everyuth Facewash. She made her acting debut with the Bollywood movie Roar: Tigers of the Sundarbans in 2014. The movie was failed at the Box Office but her performance was appreciated by film critics.

According to Woodgram, Nora Fatehi’s estimated Net Worth, Salary, Income, Cars, Lifestyles & many more details have been updated below. Let’s check, How Rich is Nora Fatehi in 2022? 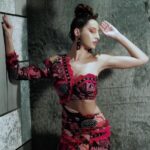 Nora Fatehi made her way into Telugu cinema with a special appearance in a dance sequence in the movie ‘Temper,’ directed by Puri Jagannath, in 2015. The same year, she also appeared alongside Emraan Hashmi in the Hindi 3D science-fiction thriller ‘Mr. X,’ which was directed by Vikram Bhatt and produced by Mahesh Bhatt.

Nora became famous name as a dancer for “Item Numbers” in South Indian movies and appeared as herself in the Malayalam movie ‘Double Barrel’ and in the Telugu movies Kick 2, Loafer and Sher. Later on, she made a special appearance in the song ‘Manohari’ in the Telugu/Tamil version of the blockbuster film ‘Baahubali: The Beginning.’

Nora Fatehi made her entry into reality entertainment with her appearance in ‘Bigg Boss 9,’ hosted by Bollywood superstar Salman Khan, in December 2015. She joined the show as a “Wild Card Entry”, with Gizele Thakral. She spent three weeks inside the house, till she got evicted on January 3, 2016. She also appeared on the dance reality show ‘Jhalak Dikhhla Jaa’ later in 2016.n Her participation in reality shows earned her recognition and she continued to be invited as a guest on TV shows such as ‘Entertainment Ki Raat’ and ‘Troll Police.’

Nora bagged the lead role opposite Sanjay Suri in the psychological thriller ‘My Birthday Song,’ released in 2018. In the same year, she did an item song ‘Dilbar’ which is a remake of the 1990s song Dilbar in the John Abraham and Aisha Sharma starring movie ‘Satyamev Jayate. In 2020, she appeared as a lead actress along with Shraddha Kapoor and Varun Dhawan in Street Dancer 3D.

Who is the crush of Nora Fatehi?

Nora Fatehi said-“Since I Was 12, Hrithik Roshan Has Been My Crush”.

Is Nora Fatehi the best dancer?

Nora Fatehi has won the hearts of not just the audience but also of the contestants and the co-judges of India’s Best Dancer. In no time, Nora carved a place for herself in India’s Best Dancer family with her impeccable knowledge of dance and flawless fluency in Hindi on the show.

What is the Terence Lewis video controversy with Nora Fatehi?

A video of Nora Fatehi and Terence Lewis has created controversy. A video of both of them is becoming fiercely viral on social media, seeing that the fans are raging on the terrace. In the video, Terence’s hand is seen hanging on Nora’s back. In that episode, Bollywood actor Shatrughan Sinha and his wife Poonam Sinha came as guests. To give respect to this pair, when the three judges stand up from their chair, bow down and greet them. Just then, while raising his hands, Terence’s hand hit Nora’s back. Although Nora did not react to it, she remained completely normal.

Who has the best navel, Katrina Kaif or Nora Fatehi?

A dramatically big navel in the flat midriff with curvy waist and the sense of exposure are the biggest highlights of Katrina Kaif. This will easily make people admire her navel during special appearance songs. While Katrina mesmerizes with her big navel. Nora’s cute pierced navel and curvy waist took a storm among the audience. Her dancing skills along with hot belly moves earned her chances to give the special appearances in movies.