Nargis Fakhri is a well-known American film actress and model. She mainly appears in Hindi and English-language films. Her first role in the movie began with the 2011 romantic drama Rockstar, for which she was nominated for Filmfare Award for Best Female Debut.

Nargis Fakhri was born on 20 October 1979 in the Queens Borough of New York City, US. Her father, Mohammed Fakhri was a Pakistani, and her mother, Marie Fakhri, a Czech, is a former mechanical engineer and drafter. She has a younger sister, Aliya. When she was 6 years old, her parents got divorced, and her father died a few years later. She recognizes herself as a Global Citizen because of her mixed Pakistani-Czech ethnicity and American citizenship. According to Nargis, she does not obey any religion. Nargis Fakhri completed her graduation in B.A. with a Major in Fine Arts and Minor in Psychology from Queens College, City University of New York.

At the age of 16, Nargis Fakhri began her career as a model. In 2004, she battled for the second and third cycles (seasons) of the American reality television show “America’s Next Top Model”. In the contest, she was selected for the first 2 challenges of both the cycle, but she abandoned to make it up to the top twelve contestants in the third challenge.

Subsequently, she modeled professionally in America and worked for a freelance agency, and appeared on fashion shows. She rose to fame after her appearance in the Indian print campaign for the 2009 Kingfisher Calendar.

Nargis Fakhri has an estimated net worth of INR 88 crores or $12 million.

Nargis Fakhri’s presence on the Kingfisher Calendar garnered the attention of the Indian filmmaker Imtiaz Ali, who selected to cast Nargis in his movie “Rockstar” in 2011. She made her acting debut with the movie “Rockstar” as ‘Heer Kaul’. The movie is the first film in India to show a Kashmiri Pandit wedding. Due to her bad vocabulary in Hindi, her voice in the movie was dubbed by the Indian voice-over artist and singer, Mona Ghosh Shetty. Nargis also won a Filmfare nomination for Best Female Debut for the film. 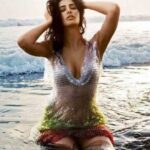 She has earned praise for her performance in the movies, Madras Cafe (2013), Main Tera Hero (2014), Azhar (2016), Amavas (2019), and more. In 2015, she made her Hollywood debut with American Actor & Director, Paul Feig directorial “Spy” in which, she performed the role of ‘Lit’. Nargis appeared in her second Hollywood film “5 Weddings” as ‘Shania Dhaliwal’ opposite actor Rajkummar Rao in 2018.

Will Nargis Fakhri become the best actress ever?

Yes, she can. But before that, she needs to learn a few things including Acting, Language for Bollywood movies, Dialogue delivery, and Expressions.

Nargis Fakhri can’t act, why is she still in the industry?

Is Nargis Fakhri the most beautiful Bollywood actress as of today?

Yes, she is the most beautiful actress