Brad Pitt is an Academy Award and Golden Globe winner known for such films as ‘Legends of the Fall,’ ‘Fight Club,’ ‘The Curious Case of Benjamin Button,’ ‘Moneyball,’ ’12 Years a Slave’ and ‘Once Upon a Time in Hollywood.’ Pitt was born William Bradley Pitt on December 18th, 1963, in Shawnee, Oklahoma, and was raised in Springfield, Missouri. He is the son of Jane Etta (Hillhouse), a school counselor, and William Alvin Pitt, a truck company manager. He has a younger brother, Douglas (Doug) Pitt, and a younger sister, Julie Neal Pitt. At Kickapoo High School, Pitt was involved in sports, debating, student government and school musicals. Pitt attended the University of Missouri, where he majored in journalism with a focus on advertising. He occasionally acted in fraternity shows. He left college two credits short of graduating to move to California. Before he became successful at acting, Pitt supported himself by driving strippers in limos, moving refrigerators and dressing as a giant chicken while working for “el Pollo Loco”. 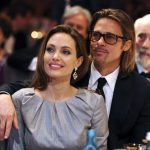 Brad Pitt made his big-screen debut in the 1989 horror film Cutting Class and his role in 1994’s Legends of the Fall helped secured his place as a Hollywood staple. A two-time winner of People magazine’s “Sexiest Man Alive” title, Pitt also proved willing to take on grittier roles for features like Seven (1995) and Fight Club (1999). He began earning more serious award consideration for performances in Babel (2006), The Curious Case of Benjamin Button (2008), Inglourious Basterds (2009) and Moneyball (2011), winning his first Oscar in the best picture category as a producer for 12 Years a Slave (2013). Along with later works like The Big Short (2015), Allied (2016) and his Oscar-winning role in Once Upon a Time in Hollywood (2019), Pitt is known for his high-profile relationships with actresses Jennifer Aniston and Angelina Jolie. 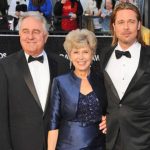 Brad Pitt With His Parents

Pitt was born William Bradley Pitt on December 18, 1963, in Shawnee, Oklahoma, the eldest of three children in a devoutly Southern Baptist family, and grew up in Springfield, Missouri. His father, Bill Pitt, owned a trucking company, and his mother, Jane Pitt, was a family counselor. Pitt originally aspired to be an advertising art director, studying journalism at the University of Missouri.

However, the young college student had other, quiet aspirations that were the product of a childhood love of movies. His dreams finally seemed tangible his last semester at university when he realized, “I can leave.” On a whim, Pitt dropped out of college, packed up his Datsun, and headed west to pursue an acting career in Los Angeles, just two credits shy of a college degree. 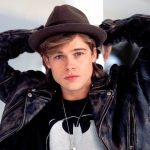 Pitt told his parents he intended to enroll in the Art Center College of Design in Pasadena but instead spent the next several months driving a limousine chauffeuring strippers from one bachelor party to the next, delivering refrigerators and trying to break into the L.A. acting scene. He joined an acting class and, shortly after, accompanied a classmate as her scene partner on an audition with an agent. In a twist of fate, the agent signed Pitt instead of his classmate. After weathering only seven months in Los Angeles, Pitt had secured an agent and regular acting work. 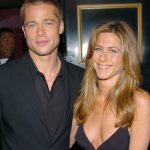 As of 2021, Brad Pitt Net Worth is roughly $300 Million dollars, making him one of the richest actors in the world. Brad Pitt Net Worth and salary, Brad Pitt is an award-winning film actor and producer who has Net Worth of $300 million. Brad is one of the most famous and highest-paid entertainers in the world, consistently earning a minimum of $20 million for major motion picture releases. He has been nominated for several Academy Awards. He won an Academy Award as a Producer in 2014 when that film took home the Best Picture award. 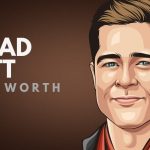 After various guest appearances and minor roles, Pitt gained notoriety for his supporting role in Thelma and Louise before going on to star in the Academy-Award winning 1992 film A River Runs Through It. Pitt received tremendous praise for his performance in the highly successful 1995 crime drama Seven, which grossed $327 million worldwide. Pitt received a Golden Globe award as well as an Academy Award nomination for his next film, 12 Monkeys.

In 1991 Brad earned just $6,000 for his bit part in Thelma & Louise. Just two years later he earned $500,000 for Kalifornia. That’s the same as just under $1 million after adjusting for inflation. Two years after Kalifornia, he earned a cool $4 million for Se7en. The following year he earned his first $10 million paychecks for Sleepers. He earned another $10 million for Seven Years in Tibet.

By the late 1990s, his base film salary had increased to $17.5 million, which he earned for Meet Joe Black, Fight Club, Spy Game and Troy. He earned $20 million for Mr. & Mrs. Smith and has earned $20 million for most starring roles that he is not a producer. He cut his salary in half to $10 million to appear in the Tarantino movies Inglorious Basterds and Once Upon a Time in Hollywood.

In 2001 Brad accepted a lower base salary of $10 million in exchange for a percentage of backend receipts when he co-starred in Ocean’s Eleven. When it was all said and done, he ended up earning $30 million from the film. 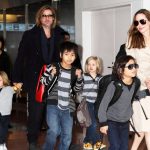 Pitt’s earliest credited roles were in television, starting on the daytime soap opera Another World (1964) before appearing in the recurring role of Randy on the legendary prime time soap opera Dallas (1978). Following a string of guest appearances on various television series through the 1980s, Pitt gained widespread attention with a small part in Thelma & Louise (1991), in which he played a sexy criminal who romanced and conned Geena Davis. This led to starring roles in badly received films such as Johnny Suede (1991) and Cool World (1992). 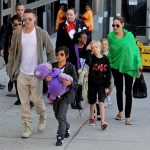 Brad Pitt And Angelina Jolie With Their Children

But Pitt’s career hit an upswing with his casting in A River Runs Through It (1992), which cemented his status as a multi-layered actor as opposed to just a pretty face. Pitt’s subsequent projects were as quirky and varied in tone as his performances, ranging from his unforgettably comic cameo as stoner roommate Floyd in True Romance (1993) to romantic roles in such visually lavish films as Interview with the Vampire: The Vampire Chronicles (1994) and Legends of the Fall (1994), to an emotionally tortured detective in the horror-thriller Se7en (1995). His portrayal of frenetic oddball Jeffrey Goines in 12 Monkeys (1995) won him a Globe for Best Performance by an Actor in a Supporting Role.

In 2013, Pitt won acclaim for his performance as Gerry Lane in the zombie-apocalyptic thriller World War Z (2013), directed by Marc Forster, and later that year appeared as a supporting character in The Counselor. He also received raves for his work on 12 Years a Slave. The film, directed by Steve McQueen, tells the true story of free African-American musician Solomon Northup (played by Chiwetel Ejiofor) who is kidnapped and sold into slavery. Pitt plays a Canadian carpenter who greatly aids Northup, with a cast that includes Benedict Cumberbatch, Lupita Nyong’o, Michael Fassbender and Quvenzhané Wallis. 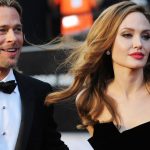 For his work as a producer on the film, Pitt earned his fifth Academy Award nomination, receiving his second nod in the best picture category. He won the award in 2014-marking his first Oscar win-sharing it with McQueen, Dede Gardner, Jeremy Kleiner, and Anthony Katagas.

That year also saw Pitt starring as an army sergeant in the WWII action drama Fury. Then in 2015, Pitt co-starred with wife Jolie in the art house outing By the Sea, which she wrote and directed. He also appeared in The Big Short, a film that focuses on the housing market bubble that fueled the 2008 financial collapse and a group of men who’d predicted the turmoil to come. Based on the nonfiction bestseller by Michael Lewis, the project earned a slew of award nominations. Pitt followed by starring in the WWII romantic thriller Allied (2016), with Marion Cotillard, and the satirical War Machine (2017), as a character based on former U.S. General Stanley McChrystal. In 2019, he teamed with Leonardo DiCaprio in Tarantino’s Once Upon a Time in Hollywood, leading to his second Golden Globe and first Oscar win for the best supporting actor, and also headlined the sci-fi adventure Ad Astra. 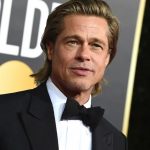 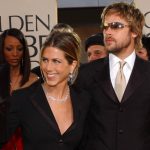 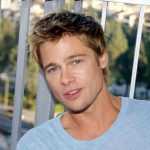 Some Known Facts About Brad Pitt

How Much Is Brad Pitt Worth Today?

What Are Brad Pitt And Angelina Jolie‘s Net Worth?

He Followed It With The Role Of Heinrich Harrer In The Biopic Seven Years In Tibet (1997). Pitt Reteamed With Fincher To Star In The Apocalyptic Film Fight Club (1999) In A Role That Required Him To Learn Boxing, Taekwondo, And Grappling.