Anveshi Jain is a well-known Indian actress, model, host, and emcee (a master of ceremonies at an entertainment or large social occasion). Apart from being a host, she is also a motivational speaker, dating coach, and electrical engineer. She is mostly famous for her work in the small screen industry and got huge fame after playing a role in Alt Balaji’s web series Gandi Baat.

Anveshi Jain is an independent live celebrity show host and corporate emcee who has hosted more than 1000 shows. She loves singing and has performed at various events. She was born in a middle-class Jain family on 25 June 1991 in Khajuraho, Bundelkhand, Madhya Pradesh. Her father is a serviceman and his mother is a housewife. She has a brother named Pranjal Jain. After completing primary education Anveshi Jain completed her Bachelor in Electrical and Electronic Engineering from the Rajiv Gandhi Proudyogiki Vishwavidyalaya, Bhopal, Madhya Pradesh. Right from her childhood, she was interested in acting. From a very young age, she has been taking part in numerous modeling shows. In her college days, she has walked the ramp many times.

After completing her engineering studies in Electrical, she stepped up into the business profession. However she wants to try out something different thus left the business and without informing her family shifted to the City of Dreams, Mumbai. Her passion for acting and modeling earned her supportive role in the ALT Balaji’s series BOSS: Baap of Special Services.

According to Woodgram, Anveshi Jain’s estimated Net Worth, Salary, Income, Cars, Lifestyles & many more details have been updated below. Let’s check, How Rich is Anveshi Jain in 2022? 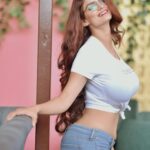 Although, Anveshi Jaingrabbed huge attention after her lusty and hotness role in the Gandi Baat 2 in the same banner. Anveshi was set to be a contestant in the Big Boss 13 however due to her mistake she had been replaced by Abu Malik. As per the Bigg Boss rule, a contestant should never make a post about this. Before acting, she worked as a host at many Shows like Make In India, IFA Berlin. In 2019, she won Dadasaheb Phalke Icon Award, in two categories – Social Influencer of The Year and Persona of the year.

In 2020, Anveshi Jain appeared in one more Alt Balaji’s web series Who’s Your Daddy. In this web series, she played the role of Ms. Chhibber. The famous Youtuber Harsh Beniwal played the lead role of Soggy as the son of Prem Singh. The character of Prem Singh is played by famous actor Rahul Dev. In the coming time, Anveshi will appear in Triple Siyapa, Nahana Hai? and Kudi Virgin Hai.

Why is Anveshi Jain so popular on social media?

Anveshi Jain is extremely popular for her killer looks and her sizzling figure. Apart from her Instagram she also has her own the app- The Anveshi Jain Official App. In her app, she has her own live sessions where she interacts with each and plays fun games, etc. This has made her a favorite among everyone and her app is now one of the most trending apps on IOS.

Which one is hotter, Anveshi Jain or Poonam Pandey?

They are both beautiful, but Anveshi Jain has the edge because she is new to the industry and got very huge fame after the Gandii Baat web series.

What makes Anveshi Jain the most Google actress of this year?

Anveshi is a gorgeous model, actress anchor, and many more. In one word she is a beauty with a brain. She extremely hot and beautiful and has played a bold role in Gandii Baat season 2. People went crazy after watching Anveshi’s looks and hot body. That’s why she becomes the most searchable personality on Google.

Where does Anveshi Jain live?

Her birthplace is Khajuraho, Bundelkhand, Madhya Pradesh, India but she confidentially moved to Mumbai without telling her family at a very young age and now she is the most popular TV actress of this era.