Amy Louise Jackson (Amy Jackson) is a British film actress and model known for her work in Indian films. She began her modeling career at the age of 16 and went on to win the Miss Teen World competition in 2009. Subsequently, director A. L. Vijay cast her as the leading lady of the Tamil language period-drama Madrasapattinam (2010).

Jackson continues to act in Indian films of all languages, including Tamil, Hindi, Telugu and Kannada films, with some of her notable roles including Ekk Deewana Tha (2012), Singh Is Bliing (2015) and 2.0 (2018). She is also known for playing the role of Imra Ardeen / Saturn Girl on the third season of The CW’s superhero series, Supergirl.

Jackson was born in Isle of Man to British Christian parents, Alan and Marguerita Jackson. She has an elder sister, Alicia who is also an actress. The family returned to their parents’ home in Woolton, Liverpool, two years after Amy’s birth so that her father, who works as a producer for BBC Radio Merseyside, could continue his media career. Amy Jackson net worth is estimated to be $2 million. She has modeled in different European countries and also featured in many Indian movies. Amy Jackson was born in Isle of Man to British parents, Alan Jackson and Marguerita Jackson. She has an elder sister, Alicia Jackson. 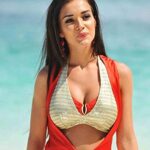 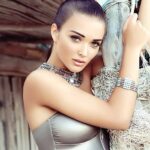 After winning the Miss Teen Liverpool and Miss Teen Great Britain pageants, Amy won the title of Miss Teen World in 2009, which resulted in a modeling contract in the US. She won Miss Liverpool in 2010. She competed for the Miss England title in 2010 and was crowned the runner-up to Jessica Linley.

In 2009, Jackson started her modeling career with the Northern-based modeling agency, Boss Model Management, and then went on to sign with her London agency, Models 1.

In 2010, Indian film producers spotted Jackson’s photo on the Miss Teen World website and invited her to audition for the Tamil period-drama film Madrasapattinam (2010). Despite having had no previous acting experience, she was cast as the female lead opposite Arya. The film, set against the backdrop of 1947 India, tells the story of a British Governor’s daughter who falls in love with a village boy.

Jackson admitted that it was very difficult to learn the Tamil dialogues. The film was released on 9 July 2010; it was praised by critics and performed well at the box office, with Jackson gaining praise for her performance. Sify wrote, “It is an out and out Amy Jackson show. She is simply amazing to deliver lines in Tamil, and is one good reason to see the film”. Behindwoods wrote, “The one who walks away with the top honors is Amy Jackson for a beautiful portrayal of a lady torn between her love and the mighty empire. She looks absolutely beautiful, emotes well through her expressive eyes and is able to earn the sympathy of the audiences during tough times”. Rediff wrote, “Amy Jackson is almost perfect as the wide-eyed young girl who is seeing India for the first time, fascinated by its culture”. She received a nomination for the Vijay Award for Best Debut Actress for her role in the film. 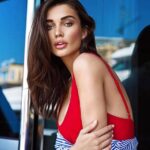 In 2011, she was signed by Gautham Menon to play the female lead opposite Prateik Babbar in Ekk Deewana Tha (2012), the Hindi remake of 2010 hit romantic drama film Vinnaithaandi Varuvaaya. She essayed the role played by Trisha in the original, of Jessie Thekekuttu, a Malayali Nasrani Christian who falls in love with a Hindu boy but is prevented from pursuing the romance by her father. The film was released on February 2012. Jackson received praise for her performance and for her chemistry with Babbar, with BehindWoods stating that “she has done wonders,” and the Times of India saying that “she never disappoints.”

In September 2012, Jackson made her return to Tamil cinema with a supporting role in Thaandavam (2012), starring opposite Vikram and Anushka Shetty. She was signed for the film in 2011 and shooting took place in India and London, enabling Jackson to return to see her family and friends. It was her second collaboration with director A L Vijay after Madrasapattinam (2010). She played the role of Sarah Vinayagam, a British-born Anglo-Indian girl who wins the Miss London title. She reportedly dubbed her own dialogues in Tamil. She received her first nomination for the Filmfare Award for Best Supporting Actress – Tamil at the 60th Filmfare Awards South ceremony.

She made her debut in Telugu cinema with the Vamsi Paidipally’s Yevadu (2014) alongside Ram Charan and Shruti Haasan, playing the role of Shruti.

Jackson next starred as supermodel Diya in Shankar’s romantic thriller film, whose title is simply (2015), the biggest project in her career. The making of the film, one of the most costly Indian films to date, took over two-and-a-half years, with a major part of the film being shot in China. The film was released on 14 January 2015 and received a mixed critical response, although Jackson’s performance received favorable reviews. Deccan Chronicle wrote that she was “simply superb. She is another highlight of the film and has given a mature performance”, while Sify noted that she was “the biggest surprise packet in the film” and “perfect eye candy”. Consequently, she was ranked #1 in The Times of India, Chennai Edition list of the most desirable women in 2014.

After I (2015), Jackson signed on to Prabhu Deva’s Singh Is Bliing (2015), opposite Akshay Kumar. She had signed on to be part of Venkat Prabhu’s supernatural thriller Masss (2015), but opted out of it later when the script and her character were changed. Instead, she signed on to Velraj’s Thanga Magan (2015) alongside Dhanush and Samantha Ruth Prabhu.

Soon after, Jackson starred in Thirukumaran’s Gethu (2016), portraying an Anglo-Indian girl, for which she won positive reviews, She has been shooting for a “gritty BBC drama series”, on which she declined to further elaborate. She then portrayed the lead female role in Atlee’s Theri (2016), featured alongside Vijaywhile portraying a Malayali teacher. Her performance received positive reviews and her role as a teacher was well appreciated. Upon release, the film went on to become one of the most profitable Tamil films of all time.

On 25 September 2017, it was announced that Jackson had been cast in her first Hollywood role as Imra Ardeen, aka Saturn Girl, in The CW’s superhero drama series Supergirl(2017). The character made her first appearance in the third season. The series, based on DC characters created by Jerry Siegel and Joe Shuster, is produced by Berlanti Productions in association with Warner Bros Television.

Jackson has played Sita in Prem’s Kannada film The Villain (2018) alongside Shiva Rajkumar and Sudeep. She starred as the andro-humanoid robot Nila in Shankar’s film 2.0 (2018) alongside Rajinikanth and Akshay Kumar.

She is a regular attendee at BAFTA, Cannes Film Festival, British Fashion Awards, International Fashion Weeks and has been featured in fashion magazines like Vogue, Marie Clare, Cosmopolitan, Hello. She is also an ambassador and spokesperson for charities such as Women’s United Nations for The Sneha Sargar Orphanage, Being Human, St Judes Hospice.

Amy Jackson lives in Mumbai, Maharashtra. In 2014, with a cat named Alfie, she posed in a PETA ad campaign promoting the adoption of animals from shelters. In addition to her work with PETA, Jackson supports charities such as St Jude’s hospital in Mumbai and “Girl Child” education in India. She serves as a brand ambassador for Yardley of London and Ponds Beauty.

In 2017, Jackson was setting up a restaurant in London with her mother Marguerita. It was scheduled to open its doors by the end of August. She said, “I always wanted to be an entrepreneur. I love visiting new restaurants and trying different cuisines all over the world. My love for food has inspired me to open this restaurant”. As of 4 March 2017, Jackson announced her new mobile app, Amy Jackson Official App, as in-app social feed for Facebook, Twitter and Instagram in collaboration with New York-based startup EscapeX.

In early January 2019, Jackson revealed that she was dating hotelier George Panayiotou, the son of British businessman Andreas Panayiotou.

In March 2019, she announced that she is pregnant with her first child. On 6 May 2019, Jackson and Panayiotou became engaged.

Some Known Facts About Amy Jackson