Aly Goni is an Indian television actor who never fails to make our hearts swoon over his swag. Born to Amjad Goni and Rubi Goni on 25th February 1991 in Bhaderwah, Jammu & Kashmir, India. He has been exuding charm on the silver screen for almost eight years now and became a household name with his performance in Ekta Kapoor’s popular family drama Yeh Hai Mohabbatein, starring Divyanka Tripathi Dahiya and Karan Patel in lead roles. In 2011, he became the winner of IFTI and decided to go ahead in Modelling or Acting as his career. He starts his career as a contestant in MTV’s Show “Splitsvilla 5” in 2012, he first rose to fame appearing on the sixth series of MTV’s Splitsvilla.

He is the parallel male lead to Karan Kundra‘s character in the musical soap opera Yeh Kahan Aa Gaye Hum. While attending college in 2011, he won a modeling competition organized by Indian Film & Television Institute, kickstarting his career. Also known for emerging in Colors TV’s comedy reality series Khatra Khatra Khatra. In 2019, he participated in the reality shows Khatron Ke Khiladi 9 and Nach Baliye 9 and emerged as a finalist in both the reality shows. He is a well-known tv actor and has a huge fan following. In 2014, Goni was dating Serbian model Nataša Stanković but the couple reportedly broke up and was invited to participate as an ex-couple in Season 9 of dance competition Nach Baliye in 2019. According to WoodGram, Aly Goni’s estimated Net Worth, Salary, Income, Cars, Lifestyles & many more details have been updated below. Let’s check, How Rich is Aly Goni in 2022? 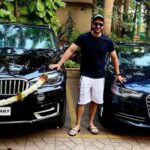 Aly Goni Net Worth And Lifestyle

Noted, Currently, We don’t have enough information about House, Monthly/Yearly Salary, etc. We will update you soon.

A celebrity’s rumor mill is always churning new stories and linkups. While most of them are just tittle-tattle and evaporates when the heat is gone, there are some pieces of news that we hope in our deepest hearts to be true. And one such buzz is of television actress, Jasmin Bhasin, and Aly Goni. Their linkup rumors started doing the rounds ever since they participated in the ninth season of the television show, Khatron Ke Khiladi.

Jasmin is known for her acting stint in Dil Toh Happy Hai Ji. She has been winning hearts with her on-screen presence and bubbly nature. She has often been making headlines for her relationship rumors. She had even visited Nach Baliye 9 to support Aly Goni and his ex-girlfriend, Natasa Stankovic on the show. Later, people had started speculating that Jasmin and Aly’s linkup rumors to be true.

We remember in an interview with India Forums, Jasmin had cleared the air and had stated that she came on the show to support her best friend, Aly, who was in danger. She had even shared that she advises the duo to date. Uhmm, time and again, Jasmin had brushed off her relationship rumor with her ‘just friends’ stance but looks like no one is ready to believe it.

Just like Divyanka Tripathi and Vivek Dahiya found love in each other on the sets of Yeh Hai Mohabbatein, similarly, there are other celebs too, from the show, who are rumored to be dating. One of the celeb alleged couples whose Instagram accounts substantiate the speculations, even more, is Aly Goni and Krishna Mukherjee. (Also Read: 8 Indian TV Celeb Couples Who Are Rumoured To Be Dating In Real Life)

Aly and Krishna’s hot and sizzling pictures prove that they are madly in love with each other. Even as per the sources, Aly and Krishna spend a lot of time together on the sets when not shooting. Krishna is often seen in Aly’s make-up room, and they wait for each other to pack up and leave together. But in a recent interview with the Times Of India, Krishna cleared the air that she and Aly are ‘just friends’.

While Aly is pursuing his graduation, He becomes a finalist of modeling events which was organized by IFTI (Indian Film & Television Institute) in 2011. He won the title of IFTI. Aly decided to go ahead with modeling or acting as his career. Initially, his parent didn’t allow him. After 1-2 years of struggle span, he selected for the MTV most successful show “Splitsvilla”. He was seen on season 5 of splitsvilla.

In 2013, He debut in the television industry with Star Plus TV Show “Ye Hai Mohabbatein” in role Romesh “Romi” Kumar Bhalla. This is the most famous role of Aly and continuously playing this role for 5 years. During this, he was seen playing role in other TV shows like Kuch Toh Hai Tere Mere Darmiyaan, Yeh Kahan Aa Gaye Hum, Bahu Hamari Rajni Kant, Dhhai Kilo Prem and Naagin 3.

In 2019, Aly taking part in Khatron Ke Khiladi 9 as a contestant. On that, he is seeing alongside Vikas Gupta, Bharti Singh, Harsh Lambachiya, and Aditya Narayan.

Why Did Natasha And Aly Split?

Both Were In A Relationship For 1 Year And Aly’s Sister In Law Introduced Them Both. Aly Is Said To Have Confirmed The News Of His Relationship Ending And He Said, “Yes, We Have Split Up. I Think I Would Love To Live With An Indian Girl. We Had A Lot Of Issues Due To The Separation Of The Cultural Background.