William Wallace, a Scottish knight, became a central early figure in the wars to secure Scottish freedom from the English, becoming one of his country’s greatest national heroes. When you think of medieval, sword-wielding Scottish heroes, it’s most likely to be William Wallace that you’re envisioning in your head. (And if you’ve seen the 1995 film Braveheart, there’s a good chance you are picturing him as a face-painted Mel Gibson – yes?!).

Born in Elderslie near Paisley in 1270, William Wallace is hailed by many as the greatest of Scots. He was to become the leader of the Scots’ resistance against the English occupation at the beginning of the Scottish Wars of Independence. Most famously, he defeated the army of the ‘Auld Enemy’ at the Battle of Stirling Bridge but was eventually betrayed and executed in London. Across Scotland, you’ll find many memorials and statues made in his image, as well as monuments erected to commemorate the battles of the Wars of Independence. William Wallace was a member of the lesser nobility, but little is definitely known of his family history or even his parentage. Blind Harry’s late-15th-century poem gives his father as Sir Malcolm of Elderslie; however, William’s own seal, found on a letter sent to the Hanse city of Lübeck in 1297, gives his father’s name as Alan Wallace. This Alan Wallace may be the same as the one listed in the 1296 Ragman Rolls as a crown tenant in Ayrshire, but there is no additional confirmation. Blind Harry’s assertion that William was the son of Sir Malcolm of Elderslie has given rise to a tradition that William’s birthplace was at Elderslie in Renfrewshire, and this is still the view of some historians, including the historical William Wallace Society itself.

However, William’s seal has given rise to a counterclaim of Ellerslie in Ayrshire. There is no contemporary evidence linking him with either location, although both areas had connections with the wider Wallace family. Records show early members of the family as holding estates at Riccarton, Tarbolton, and Auchincruive in Kyle, and Stenton in East Lothian. They were vassals of James Stewart, 5th High Steward of Scotland as their lands fell within his territory. Wallace’s brothers Malcolm and John are known from other sources.

Born around 1270 to a Scottish landowner, William Wallace’s efforts to free Scotland from England’s grasp came just a year after his country initially lost its freedom, when he was 27 years old. 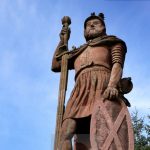 In 1296, England’s King Edward I forced Scottish king John de Balliol, already known as a weak king, to abdicate the throne, jailed him and declared himself ruler of Scotland. Resistance to Edward’s actions had already begun when, in May 1297, Wallace and some 30 other men burned the Scottish town of Lanark and killed its English sheriff. Wallace then organized a local army and attacked the English strongholds between the Forth and Tay rivers.

Wallace evaded capture by the English until 5 August 1305 when John de Menteith, a Scottish knight loyal to Edward, turned Wallace over to English soldiers at Robroyston near Glasgow. (The site is commemorated by a small monument in the form of a Celtic cross.) Letters of safe conduct from Haakon V of Norway, Philip IV of France, and John Balliol, along with other documents, were found in Wallace’s possession and delivered to Edward by John de Segrave. 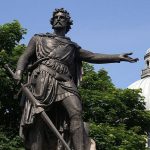 Wallace was transported to London, lodged in the house of William de Leyrer, then taken to Westminster Hall, where he was tried for treason and for atrocities against civilians in war, “sparing neither age nor sex, monk nor nun.” He was crowned with a garland of oak to suggest he was the king of outlaws. He responded to the treason charge, “I could not be a traitor to Edward, for I was never his subject.”

Following the trial, on 23 August 1305, Wallace was taken from the hall to the Tower of London, then stripped naked and dragged through the city at the heels of a horse to the Elms at Smithfield. He was hanged, drawn and quartered strangled by hanging, but released while he was still alive, emasculated, eviscerated and his bowels burned before him, beheaded, then cut into four parts.  His preserved head (dipped in tar) was placed on a pike atop London Bridge. It was later joined by the heads of the brothers, John and Simon Fraser. His limbs were displayed, separately, in Newcastle, Berwick, Stirling, and Perth. 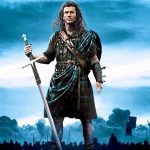 A plaque unveiled 8 April 1956, stands in a wall of St. Bartholomew’s Hospital near the site of Wallace’s execution at Smithfield. It includes in Latin the words “Dico tibi verum libertas optima rerum nunqual servili sub nexu vivito fili” (I tell you the truth. Freedom is what is best. Sons, never live life like slaves.), and in Gaelic “Bas Agus Buaidh” (Death and Victory), an old Scottish battle cry. In 1869 the Wallace Monument was erected, very close to the site of his victory at Stirling Bridge. The Wallace Sword, which supposedly belonged to Wallace, although some parts were made at least 160 years later, was held for many years in Dumbarton Castle and is now in the Wallace Monument.

Was There A Real William Wallace?

The Character Of William Wallace Is Very Real, As Are The Battles He Fought In. In Reality, Not That Much Is Actually Known About The Real William Wallace. All That Is Known Of His Life And His War Against England Comes From A Late-15Th-century Epic Poem By Blind Harry.

How Did William Wallace Die?

Decapitation, William Wallace Cause Of Death

Why William Wallace Is A Hero?

Sir William Wallace. A Hero Of Scotland And A True Patriot, He Had A Burning Desire For Peace And Freedom Which United The Country’s Clans, Gained The Loyalty Of Its People, Struck Fear Into His Enemies And Defied The Cruel Hand Of An Evil, Warring And Invading King – Edward I Of England.