Tobey Maguire is an American actor who is best known for his role as Spider-Man in the Spider-Man film trinity. He has also tried his hand at production for a few movies and is, without doubt, one of the most recognized faces in Hollywood. Maguire was trained in a drama school at the insistence of his mother when he was a child and from then on he always wanted to be an actor. He initially started off an actor on television but gradually got enough chances to showcase his skills as an actor in films and he primarily played teenaged characters in the early part of his career.

Maguire also suffered from alcohol abuse at a critical juncture in his career that saw him pull out of a film in which he was to play the lead role but after his return to acting he was welcomed back by filmmakers and in 2000 he got his biggest break with the release of the first Spider-Man film. Following the success of Spider-Man; Maguire starred in the two sequels as well which were equally successful and also featured in plenty of films that got him critical appreciation from critics and the audiences alike. Tobias Vincent Maguire was born in Santa Monica, California, on June 27, 1975, the son of Wendy, a secretary turned screenwriter and film producer, and Vincent Maguire, a construction worker, and cook. He has four half-brothers. He is of one-eighth Austrian and one-eighth Puerto Rican descent. His parents, 18 and 20 years old, were unmarried at the time of his birth; the two married and subsequently divorced when Maguire was two. Maguire spent much of his childhood moving from town to town, living with each parent and other family members.

During his childhood, Maguire entertained the idea of becoming a chef and wanted to enroll in a home economics class as a sixth-grader. His mother offered him $100 to take a drama class instead, and he agreed. The transient nature of his school years began to take a toll on Maguire emotionally, and after another relocation for his freshman year, he dropped out of high school and did not return. Instead, he pursued an acting career. By 2000, he had obtained his GED, noting that during his school days, “I was not doing school; I was showing up, but not really giving myself. 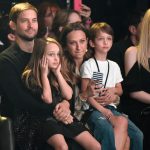 Tobey Maguire With His Wife And Children

Sara Gilbert (1993–1996) – Tobey dated actress Sara Gilbert from the sitcom Roseanne for three years until 1996.
Rashida Jones (1997–2000) – Rashida and Tobey had a three and a half years long relationship that ended in the year 2000, prior to Tobey’s famous role as Spiderman.
Kirsten Dunst (2001) – During the Spiderman movie shooting, Maguire was RUMORed to be dating his co-star, Kirsten Dunst in April 2001. The rumor began when the director Sam Raimi was interviewed and asked about it. However, any sort of such relationship was denied by both of them.
Demi Moore (2002) – A dating relationship with Demi Moore was also a RUMOR that spread out when Tobey’s career was really escalating. 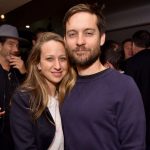 Jennifer Meyer (2003–2017) – Tobey came in contact with Jennifer Meyer, the jewelry designer, in 2003 at Universal Studios during his shooting for the movie Seabiscuit. The two later decided to get engaged in the year 2006. On November 10, 2006, the couple had a daughter named, Ruby Sweetheart Maguire. The middle name “Sweetheart” was given to her in the memory of Meyer’s grandmother who had given her that name when she was a child. A few months after Ruby’s birth, Jennifer’s grandmother passed away. Jennifer and Tobey later married on September 3, 2007. The ceremony took place in Kona, Hawaii. Later, on May 8, 2009, they had a boy who was named Otis Tobias Maguire. In October 2016, after 9 years of married life, the couple split. Their divorce was finalized in 2017.
Tatiana Dieteman (2018-Present) – In early 2018, Tobey started dating model, Tatiana Dieteman. They are seen together on many outings together.

Tobey Maguire’s estimated Net Worth, Salary, Income, Cars, Lifestyles & much more details has been updated below. Let’s check, How Rich is Tobey Maguire in 2020? 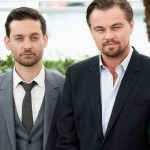 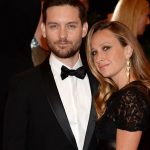 Are James Franco And Tobey Maguire Friends?
Tobey Maguire Starred As Peter Parker/Spider-man, Kirsten Dunst Portrayed Mary Jane Watson, And James Franco Played Harry Osborn. Nowadays, Maguire Has Stayed Out Of The Spotlight. Dunst And Franco Continue To Act, But The Latter Star Has Laid Low Following Sexual Misconduct Allegations.
How Much Is Tobey Maguire Worth?
Tobey Maguire Is An American Actor And Film Producer Who Has A Net Worth Of $75 Million Dollars. Tobey Maguire’s Acting Career Began In 1989, And After A String Of Supporting Roles, Often To Characters Portrayed By Leonardo Dicaprio, He Shifted His Focus And Began To Land Lead Roles.
What Does Tobey Maguire Do?
Film Producer, Child Actor
How Much Money Did Tobey Maguire Make For Spiderman?
It Went On To Make $403.7 Million In The U.S. And $821.7 Million In Total Worldwide.