Steve Irwin also known as “The Crocodile Hunter”, was an Australian zookeeper, television personality, wildlife expert, environmentalist, and conservationist. Stephen Irwin achieved worldwide fame from the television series The Crocodile Hunter (1996–2007), an internationally broadcast wildlife documentary series which he co-hosted with his wife Terri. Together, the couple also hosted the series Croc Files (1999–2001), The Crocodile Hunter Diaries (2002–2006), and New Breed Vets (2005). They also co-owned and operated Australia Zoo, founded by Irwin’s parents in Beerwah, about 80 kilometers north of the Queensland state capital city of Brisbane.

Stephen Irwin died on September 4, 2006, after being pierced in the chest by a stingray barb while filming in Australia’s Great Barrier Reef. His death became international news and was met with expressions of shock and grief by fans, the media, governments, non-profit organizations, and other celebrities. Many parks, zoos, streets, and an asteroid have been named in his honor. The Sea Shepherd Conservation Society named its Island-class patrol vessel MY Steve Irwin after Irwin. His widow Terri Irwin, with whom he had two children, continues to operate Australia Zoo.

Irwin’s work spawned an array of merchandise tie-ins. He was killed by a stingray during a diving expedition on September 4, 2006, off the coast of Port Douglas in Queensland, Australia. 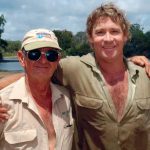 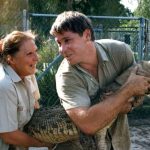 Steve Irwin was the director of the Australia Zoo in Queensland, Australia, and host of Animal Planet’s series The Crocodile Hunter (1996). The son of naturalists Bob and Lyn Irwin, he spent his entire life studying, living and working with animals. He grew up at the Queensland Reptile and Fauna Park, where he took part in the daily feeding, care, and maintenance of the park’s many animal inhabitants. He soon became an expert on local wildlife, particularly reptiles. And (as anyone who has ever seen Steve will easily believe), by the time he was 9, his dad had taught him to jump in and catch crocodiles in the rivers in North Queensland. Together, this father-and-son team could boast that every crocodile at the Australia Zoo (numbering over 150) was either caught with their own hands or bred and raised at the zoo.

Irwin met Terri Raines, In 1991, an American naturalist from Eugene, Oregon, who was visiting wildlife rehabilitation facilities in Australia and had decided to visit the zoo. According to the couple, it was love at first sight. Terri said at the time, “I thought there was no one like this anywhere in the world. He sounded like an environmental Tarzan, a larger-than-life superhero guy.” They were engaged four months later and were married in Eugene on 4 June 1992.

Together Steve Irwin and Terri Raines had two children: a daughter, Bindi Sue Irwin (born 24 July 1998), and a son, Robert Clarence Irwin (born 1 December 2003). Bindi Sue Irwin is jointly named after two of Steve Irwin’s favourite animals: Bindi, a saltwater crocodile, and Sui, a Staffordshire Bull Terrier. Irwin was as enthusiastic about his family as he was about his work. He once described his daughter Bindi as “the reason was put on the Earth.” His wife once said, “The only thing that could ever keep him away from the animals he loves are the people he loves even more.” 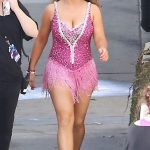 Although the Irwins were happily married, they did not wear wedding rings; they believed that in their line of work, wearing the jewellery could pose a hazard to them and the animals. 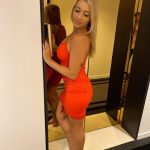 Rebecca Lobie was born in Brisbane, Australia, in the year of 1987/1966. However, her birthdate hasn’t been surface in the media, but she is at the age of 32. She holds Australian nationality and possesses Caucasian ethnicity. She is the daughter of Frank Muscillo and Joy Muscillo.

The 32-year-old, Rebecca began her career as a Managing Director in the Muscillo Holding Pvt. Ltd. She used to manage different companies’ multiple food outlets within Australia Zoo, including functions and catering. She started working in September 2001 and ended her directing career after fourteen years in December 2015.

Rebecca Lobie decided to choose her own path as she worked at Entice Food and Wine. There she is a restaurant General Manager. Moreover, she has also become a celebrity who has more than 75.6k followers on her Instagram account. There, she shares sizzling bikini pictures as well as her family pictures.

Steve Irwin and Terri spent their honeymoon trapping crocodiles together. Film footage of their honeymoon, taken by John Stainton, became the first episode of The Crocodile Hunter. The series initially started on Australian TV screens in 1996 and made its way onto North American television the upcoming year. The Crocodile Hunter became successful in the United States, the UK, and over 130 other countries, reaching 500 million people. Irwin’s exuberant and enthusiastic presenting style, broad Australian accent, signature khaki shorts, and catchphrase “Crikey!” became known worldwide. Sir David Attenborough praised Irwin for introducing many to the natural world, saying “He taught them how wonderful and exciting it was. He was a born communicator.” 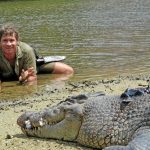 American satellite and cable television channel Animal Planet ended The Crocodile Hunter with a series finale titled “Steve’s Last Adventure.” The Last Crocodile Hunter documentary spanned three hours with footage of Irwin’s across-the-world adventure in locations including the Himalayas, the Yangtze River, Borneo, and the Kruger National Park. Irwin went on to star in other Animal Planet documentaries, including Croc Files, The Crocodile Hunter Diaries, and New Breed Vets. During a January 2006 interview on The Tonight Show with Jay Leno, Irwin announced that Discovery Kids would be developing a show for his daughter, Bindi Sue Irwin – a plan realized after his death as the series Bindi the Jungle Girl.

How Did Steve Irwin Die: Death, Death Cause – Tragic Death

On September 4, 2006, Irwin was filming a new program off the coast of Port Douglas in Queensland, Australia. Snorkeling near a stingray, he was pierced in the chest by its barb, which hit his heart. Irwin died of cardiac arrest shortly after being stung. Stunned by the news of his sudden death, people around the world mourned his passing. Many left flowers and notes at the Australia Zoo, which he and his wife ran, taking over for his parents. Others posted messages expressing their grief on the Web. Wildlife experts, such as Jack Hanna, noted that Irwin was a great conservationist.

Irwin continues to be remembered today for his many contributions to the field of wildlife education and conservation, including running an organization to rescue and protect crocodiles and supporting numerous other animal charities. November 15 has been designated Steve Irwin Day, an international tribute held annually in recognition of his life and work.

After tweeting criticism of the late wildlife conservationist and TV personality Steve Irwin, People for the Ethical Treatment of Animals is facing backlash on social media. Irwin would have turned 57 on Friday, and to honor the host of “The Crocodile Hunter,” Google changed the logo on its search page. The doodle was a slideshow featuring illustrations of Irwin searching for crocodiles and feeding the animals while working at the Australia Zoo. He died in 2006 during a snorkeling expedition when a stingray barb pierced his heart. In response, PETA said Irwin “was killed while harassing a ray” and that the Google doodle “sends a dangerous, fawning message.”

Not everyone was a fan of Irwin’s, naturally. His countrymen, for instance, sometimes found his “ultra Aussieism” an embarrassing cliché. Further, some fellow naturalists found his television antics to be those of an irresponsible thrill-seeker who committed the dual sins of exaggerating the dangers of wild animals while minimizing the risks in handling them. Such types of criticism were of slight consequence to Irwin, however.

He started volunteering in Queensland’s East Coast Crocodile Management program and was able to capture more than 100 crocodiles, out of which few were relocated and few were kept at his own family park. He took charge of the management of the family park in 1991 and renamed it as ‘Australia Zoo‘ in 1998. John Stainton took film footage of him with his wife trapping the crocodiles and it was shown as the first episode of the famous wildlife documentary series ‘The Crocodile Hunter ‘.The show received a great response from the audience and the series continued to air till 2007. He hosted the series with his wife.

He had participated in many campaigns. He was also part of the ‘Australian Quarantine and Inspection Service’ and he asked to direct the fees for the advertising campaign to his wildlife fund. He died due piercing in his heart by a stingray barb while shooting an underwater documentary film ‘Ocean’s Deadliest’ in 2006. Mixed reactions were received after his death. A private funeral service was held for him and he was buried at Australia Zoo.

How Did Steve Irwin Die?

What Happened To Steve Irwin?

Irwin Died On 4 September 2006 After Being Pierced In The Chest By A Stingray Barb While Filming In Australia’s Great Barrier Reef. Irwin Initially Believed He Only Had A Punctured Lung. However, The Stingray’s Barb Pierced His Heart, Causing Him To Bleed To Death.

When Did Steve Irwin Die?