Samyuktha Hegde is a well known Indian film actress and professional dancer. She is currently active in Telugu, Tamil, Kannada, and Malayalam film industry. She made her debut in the film industry with the movie named ‘Kirik Party’ in the Kannada language which was a great hit and gave her big fame across the country. Along with acting Samyuktha Hegde is also known for her dance.

Samyuktha Hegde was born on 17th July 1998 in Kelaginamane village which is located in the Uttara Kannada district. She was born to a Hindu father and a Christian mother in Bangalore. Her birth symbol is Aquarius based on her birth date.  She has an elder brother named Deepak Hegde. Samyuktha Hegde did her schooling from St. Paul’s English School. Samyuktha is currently pursuing her degree course in BA psychology and journalism in Sri Bhagawan Mahaveer Jain College, Bengaluru which comes under the umbrella of Jain University.

Samyuktha Hege is one among the celebrities who got a breakthrough from Social Media. She got a call from selectors to act opposite to Rakshit Shetty in the movie ‘Kirik Party’ in 2016, she was 17 years old at that time. With her talent, she cleared all tests at the audition.

The actress rose to fame with this movie where she did the role of Arya. The movie was a big hit for which she even won the Filmfare Award for Best Supporting Actress – Kannada. After this, she participated in the reality show “MTV Roadies 14” and rose higher on success.

Talking about her personal life as per sources she is currently dating model Chris Sauer who lives in Germany. She regularly shares her photos with Chris Sauer on social media. However, before dating Chris, her name was involved with Roadies contestant Baseer Bob. But unfortunately, after the show ended, their relationship too ended on mutual terms. 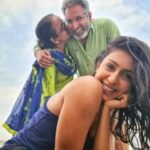 Samyuktha Hegde’s estimated Net Worth, Salary, Income, Cars, Lifestyles & many more details have been updated below. Let’s check, How Rich is Samyuktha Hegde in 2020? 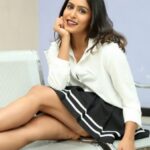 After ‘Kirik Party’ she featured in the movie College Kumar directed by Santhu, co-player with Vikky Varun, that was Got Favorable Response All Over.

Samyuktha made her Telugu debut movie Kirrak Party, reprised her role for the Telugu remake of Kirik Party with Simran Pareenja and Nikhil Siddharth replacing Rakshit Shetty and Rashmika Mandanna, respectively. Her Tamil introduction was Watchman opposite GV Prakash Kumar, which was directed by AL Vijay. Her Kannada film Omme Nishyabdha Omme Yudha, wherein starred opposite Prabhu, she plays a woman who can’t speak or hear from the love story.

Her second Tamil film was ‘Comali’ opposite Jayam Ravi and Kajal Aggarwal, which was directed by Pradeep Ranganathan. Samyuktha Hegde acted her next Tamil comedy play film Puppy along with Varun. Presently, Samyuktha Hegde will be playing a lead role in the Tamil feature film Theal along with Prabhu Deva.

In 2016, Hegde appeared as a competitor from the reality tv program MTV Roadies. In 2017, she participated in Bigg Boss Kannada and entered on Day 58 as a guest entrant. But she was ejected on Day 66 for assaulting co-contestant Samir Acharya. In October 2018, Hegde entered MTV Splitsvilla in its eleventh season as a Wild Card contender.