Rohit Sharma is a well-known Indian cricketer. He is primarily known for playing international cricket matches for Indian Team. He is also known as “Hitman”. Rohit Sharma is a right-hand batsman who generally opens the innings for team India but has batted in the middle order as well. He is also the captain of the IPL team ‘Mumbai Indians’.

Rohit Sharma was born in a middle-class Hindu family on 30 April 1987 Nagpur. His father’s name is Gurunath Sharma who worked as a caretaker in a transport firm storehouse and his mother’s name is Purnima Sharma, a housewife. He has a younger brother named Vishal Sharma who studied Hotel Management from Florida. Rohit was raised at his grandparent’s and uncle’s house due to the low income of his father. He used to visit his parents on weekends only who lived in a single room house in Dombivali.

Rohit Sharma is married to sports event manager Ritika Sajdeh. They met as professionals and Ritika used to take care of Rohit’s cricket engagements as his manager. Soon they become good friends then best friends and took their relationship to another level.

After dating for almost 6 years, Rohit proposed Ritika at the place that holds the utmost importance in his life. She accepted the proposal and the couple got married on 13 December 2015. They became proud parents of baby daughter Samaira in 2018. The couple is madly in love with each other and considers each other as their pillar of strength. Their fans love them as a couple and consider Ritika as Rohit’s lucky charm. Rohit Sharma completed his schooling from Swami Vivekanand International School and Our Lady of Vailankanni High School in Mumbai. Right after the 12th standard, he left studies to pursue his career in Cricket.  He started his cricket journey at the age of 12 by joining a cricket camp with his uncle’s money.

In the initial days of career, Rohit was coach by Dinesh Lad at the Swami Vivekanand International School, Mumbai. He taught Rohit without any coaching fee.

Its quite surprising that before becoming an opener batsman, Rohit was an off-spinner bowler. But coach Dinesh Lad noticed his batting ability and promoted him to open the innings. Rohit performed well in the Harris and Giles Shield school cricket tournaments and scored a century on debut as an opener. 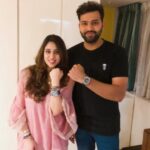 According to reports, Rohit Sharma has a total worth of over ₹ 170 crores. Most of his salary comes from BCCI and IPL. According to the Forbes India Celebrity 100, Rohit Sharma’s earnings in 2019 were INR 54.29 crores. He ranks 11 among celebrities in India, 4th among Indian cricketers, and 3rd among active cricketers. 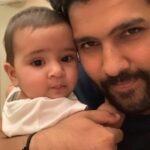 In March 2005, Rohit Sharma made his List A debut for West Zone against Central Zone in the Deodhar Trophy. He came to bat at number 8 scoring 31* off 47 balls to help West Zone win by 3 wickets. In the same tournament, Sharma scored 142* off 123 balls against North Zone. This performance of Sharma caught the eyes of selectors for the first time.

Based on his performances, Sharma was called up for India A’s visit to Abu Dubai and Australia. He was also included in the 30-member probable list for the ICC Champions Trophy.

Sharma scored 57 and 22 during his first-class debut for India A against New Zealand A in July 2006. He made his Ranji Trophy debut with Mumbai in the 2006-07 season. After a rusty start, Sharma scored 205 against Gujrat and 57 against Bengal in the finals to help Mumbai lift the Ranji trophy.

The Hitman has spent his first-class career with Mumbai where he set various records including his highest career score of 309* against Gujrat in the Ranji Trophy. Sharma was appointed to lead the team after Ajit Agarkar retired ahead of the 2013-14 domestic season.

Rohit Sharma received his first ODI call-up against Ireland on 23 June 2007. Although he did not get to bat, India won the match by 8 wickets. At this point in time, Rohit Sharma used to bat in the middle-order. When he finally got a chance bat against South Africa, Sharma was unable to play well as he got out at 8.

Sharma scored his 1st half-century against Pakistan in November 2007 followed by a 39* against Australia and 70* against Sri Lanka in February 2008. His triple century in Ranji in 2009 ensured he returned to the ODI squad in 2010. This time Sharma took his chance as he scored his first ODI century (114) against Zimbabwe followed by another century against Sri Lanka (101*).

However, Sharma was unable to show consistent performances leading him to miss out on the 2011 ICC Cricket World Cup. Post WC, Sharma’s career got a revival when MS Dhoni recalled him and promoted him as an opener in the 2013 ICC Champions Trophy. Rohit Sharma never turned back then.

Sharma scored 177 runs in 5 innings at an average of 35.40 with two half-centuries, as India went on to lift its second Champions Trophy. The next year, Rohit scored 264 against Sri Lanka at the Eden Gardens, and in doing so surpassed Virender Sehwag’s 219 to become the highest-scoring batsman in an ODI. The record still stands, as nobody has been able to cross it.

By the 2015 ICC World Cup in Australia and New Zealand, Rohit Sharma and Shikar Dhawan were the Men in Blue’s newest openers. The duo has opened for India in 105 innings, scoring 4708 runs at an average of 45.26. The achieved personal highest opening partnership of 210 runs was achieved against Pakistan in the Asia Cup 2018.

In 2017, Rohit Sharma was named the Indian captain for the first time in his career. India won the ODI series 2-1 under his leadership. He again led India in the 2018 Asia Cup after Virat Kohli was rested after the England tour. India won the tournament after beating Bangladesh in the final.

Rohit Sharma has played in two Cricket World Cups- 2015 and 2019. His performances as India’s opener were vital in India’s run to the semi-finals in both the tournaments. His first World Cup appearance came against Pakistan, wherein Sharma scored 15. After a slow start, Sharma showed his true form when he scored 57* against UAE in the third match.

India were the favorites to win the 2019 Cricket World Cup, mainly due to the batting powerhouse of the top order. Sharma scored a century in the first match against South Africa. He scored a half-century in the second match against Australia followed by 140 against arch-rivals Pakistan.

Sharma played a crucial role as India we unbeaten in the first five matches of the World Cup. In the 6th match against England, he scored 102 as India’s unbeaten record came to an end. Rohit scored two more centuries in the last two group stage matches against Bangladesh and Sri Lanka as India secured the top spot.

Rohit finished as the tournament’s high scorer 648 runs. He scored 5 centuries and 2 half-centuries and is the only player to do so in a single World Cup.

Rohit Sharma has performed decently when called upon despite not being the first choice openers for India in test cricket. He made his entry into the Indian test team relatively late. He scored 177 on his debut against West Indies to join a small group of Indians to score a century on his debut.

Sharma went on to score 111* at the Wankhede and became the third Indian to score consecutive centuries in the first two tests. Only Sourav Ganguly (1996) and Mohammad Azharuddin (1984) achieved the feat before this. Rohit Sharma has played 32 Test matches in which he has scored 2141 runs with an average of 46.54.

He has scored one double century, 6 centuries, and 10 half-centuries. His high score of 212 runs came against South Africa in October 2019. After the innings, David Warner said that he believes that Rohit Sharma could be the one to break Brian Lara’s 400* record.

When it comes to T20, you can hardly find a complete opener than Rohit Sharma. Rohit made his T20 debut for India against England in the 2007 ICC World T20 Championships but did not get an opportunity to bat. However, he did get an opportunity against South Africa in his second match and took it with both hands.

Rohit played and scored an unbeaten 50 as India won by 37 runs. In the semi-finals against Australia, Sharma made a small cameo at the end of the innings and scored 8* off 5 balls as India won by 15 runs. In the finals, Rohit made another late cameo and made a crucial contribution of 30* from 15 balls. India won the final by 5 runs. In 2007, Sharma was used predominately as a middle-order batsman coming at number 7 or 8.

However, under MS Dhoni’s captainship, he has promoted up the order to open the innings. This change affected not only his T20 career but the ODI career as well. Today Sharma has played 28 ICC T20 World Championship matches. He has scored 673 runs at an average of 24.03 runs and a strike rate of 109.95 runs. His high score of 79* came during the 2009-10 edition against Australia.

Overall, Rohit Sharma’s statistics speak up for his T20 career. In 96 matches, Rohit Sharma has scored 2633 runs. Sharma shares the honor with his fellow teammate and captain Virat Kohli. While their race to the top spot will be the talk of the town, Rohit can be relieved with the fact that he is the only player to hit four T20 international centuries while also leading the list of the batsmen with most sixes in T20.

Rohit Sharma is the most successful captain in the Indian Premier League. He has won the IPL trophy four times, three times as the captain of the Mumbai Indians. Sharma’s IPL campaign started with the Deccan Chargers. He was the vice-captain and a key member of the DC squad which won the coveted trophy in its second season.

In 2011, Sharma was the part of Mumbai Indians for Rs 20 Lakhs. However, his contribution to the Ambani-owned franchise has been invaluable. Sharma was given the captainship of the franchise and led the MI to glory. In 2015, he led Mumbai Indians to win the IPL title by beating Chennai Super Kings with a margin of 41 runs in the final.

In the year 2017, the Mumbai Indians finished at the top of the table and also went on to win the final under his captaincy. Rohit Sharma and co became the most successful side in the IPL when they won it for the fourth time in 2019. With the bat, Sharma leads from the front as an example. He has played 188 IPL matches, scoring 4898 runs at an average of 31.60 and a strike rate of 130.82. He has hit 36 half-centuries and a sole century.

Who is better Rohit and Virat?
<a data-ail="16842" target="_blank" href="https://woodgram.com/virat-kohli-biography/" title="Virat Kohli">Virat Kohli</a> has better records in test matches than Rohit Sharma. Kohli has scored 7 double centuries while Rohit could manage to score just one double century in test matches. In terms of T20I matches also <a data-ail="16842" target="_blank" href="https://woodgram.com/virat-kohli-biography/" title="Virat Kohli">Virat Kohli</a> is in a better position because Virat has played just 77, T20I matches, and scored 2689 runs. While Rohit Sharma has played 114 T20I matches to score 2633 runs in this format.
Can Rohit Sharma break Sachin's record?
Tendulkar hit nine centuries and six half-centuries in 32 innings [all in ODIs], while Rohit’s 10th came in his 46th innings [including Tests, ODIs, and T20Is] this year.
Does Rohit Sharma eat non veg?
Rohit Sharma is a vegetarian. However, he is very fond of eating eggs. With respect to his tradition, Sharma ensures he consumes eggs only outside the home
What are best qualities in Rohit Sharma?
The best thing about Rohit Sharma is his stroke play and one of the cleanest hitters of the ball. He rarely mistimes a shot. He can play any kind of shot in the textbook of cricket and he is a widely respected player. In the last few years, he has shown glimpses of being a leader who led Mumbai Indians to IPL champions which provides competition for captaincy post along with <a data-ail="16842" target="_blank" href="https://woodgram.com/virat-kohli-biography/" title="Virat Kohli">Virat Kohli</a>.