Priyamani is an Indian multilingual film actress and former model, who works in Telugu, Kannada, Tamil, Malayalam, and Hindi language films. She has established a career in regional Indian films and is the recipient of a National Film Award for Best Actress and three Filmfare Awards in different-language films. Priyamani, born and raised in Bangalore, worked as a model before pursuing a career in films. In 2002, she made her acting debut with a leading role in the Telugu film Evare Atagaadu (2003), a box-office flop.

She gained widespread recognition for her role as village girl Muththazhagu in the Tamil romantic drama Paruthiveeran in 2007, receiving a National Film Award for Best Actress and a Filmfare Award for Best Actress Tamil for her performance. During the same year, she achieved commercial success in Telugu cinema with S. S. Rajamouli-directed fantasy-action comedy Yamadonga. 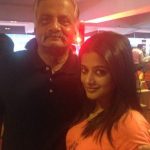 Priyamani With His Father – Family

Priyamani was born into a Tamil speaking family in Palakkad, Kerala. She modeled for Kancheepuram silks, Erode silks, and Lakshmi silks during her school years. When she was in the 12th Standard, Tamil Director, Bharathiraja, introduced her to the film industry. Her father, Vasudev Mani, who hails from Palakkad from a Tamil family, owns a plantation business and her mother, former national level badminton player, Lathamani, who hails from Thiruvananthapuram, was a bank manager at Union Bank of India.

She has an elder brother, Vishakh, who is in the plantation business with her father. While at school, she actively participated in extracurricular activities and sports. She is the granddaughter of Carnatic vocalist, Kamala Kailas. She is the cousin of film actress, Vidya Balan and the niece of the playback singer, Malgudi Shubha.

Priyamani did her schooling at Sri Aurobindo Memorial School and attended Bishop Cotton Women’s Christian College in J C Road. After completing her schooling, Priyamani modeled for print advertisements. Priyamani pursued a degree in Bachelor of Arts in psychology through correspondence.

Being one of the leading actresses in the South Indian film industry, Priyamani is living a luxurious lifestyle. She has an estimated net worth of INR 20 crore. 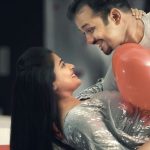 Priyamani With Her Husband

Priyamani made her debut with Telugu film, Evare Atagaadu. She then made her debut in the Malayalam Film Industry with Sathyam, but this film performed poorly at the box office. She was signed by Tamil film director and cinematographer Balu Mahendra to act in the 2005 drama Adhu Oru Kana Kaalam.

Priyamani managed to prove her acting credentials and commercial appeal with 2007’s Paruthiveeran, directed by Ameer Sultan, in which she has co-starred with debutant Karthi Sivakumar. A rural subject which told the story of a notorious young villager in Madurai, the film won critical acclaim and became a surprise box-office blockbuster. Priyamani’s performance was unanimously praised by the critics.

She had another commercially successful film in Telugu, in the 2007 film Yamadonga and in the Tamil film Malaikottai. She again received critical acclaim in 2008 for her role in the Malayalam film Thirakkatha, in which she played a role based on the turbulent real-life story of late film actress Srividya.

In 2009 she had two Tamil releases, the masala film Arumugam and the remake of the Malayalam blockbuster Classmates, titled Ninaithale Inikkum. The former was a commercial failure: Her Kannada debut film Raam was also a commercial success. 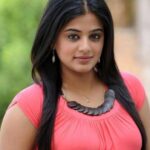 All three of her Telugu releases that year, however, (Drona, Mitrudu, Pravarakhyudu) did not do well at the box office. In 2010 she acted in the satirical film Pranchiyettan & the Saint which became the longest-running Malayalam film since 2005. She won a Filmfare nomination for her role as a Mumbai-based interior decorator in the film.

She was subsequently signed by director Mani Ratnam for his bilingual film, titled Raavanan and Raavan in Tamil and Hindi respectively. Soon after, she was roped in by Bollywood director-producer Ram Gopal Varma for his trilingual film Rakht Charitra.

Varma decided to cast her after seeing her National Award-winning performance in Paruthiveeran. Her Kannada film Vishnuvardhana became a blockbuster hit and later she starred in Anna Bond.

She appeared in an item number in the Bollywood film Chennai Express. She has completed shooting for a Malayalam film, The True Story, and the Telugu film, Chandee, in which she plays Ganga the granddaughter of a freedom fighter, who seeks revenge for the problems her family had to face. She was cast opposite Darshan in the Kannada film Ambareesha in (2014).

In 2014, she posed for a PETA ad campaign, asking the public to boycott zoos that feature caged tigers.

Who Is Priyamani Husband?

Mustafa Raj, He Is An Indian Businessman From Mumbai. He Was One Of The Organizers Of Ccl (Celebrity Cricket League). On 23 August 2017, He Married Indian Actress Priyamani, Who Has Played Several Roles In Tamil Especially In The Film Paruthiveeran.

How Is Priyamani Related To Vidya Balan?

According To Vidya, They Speak A Mix Of Malayalam And Tamil At Home. Her Elder Sister, Priya Balan, Works In Advertising. The Actress Priyamani Is Her Second Cousin. She Is An Indian Film Actress And Former Model, Who Works In Kannada, Malayalam, Tamil, Telugu, And Hindi Language Films.

Is Priyamani A Brahmin?

What Is The Age Of Priyamani?