Pranutan Bahl is a well-known Indian actress, model, and Lawyer. She has the prestigious celebrity tag too. In fact, Pranutan is popularly known as the granddaughter of Nutan (Actress), and daughter of actor Mohnish Bahl. Pranutan Bahl did her schooling at Cathedral and John Connon School, Mumbai. She completed her graduation in Legal Science & Law (B.L.S. LLB) from Government Law College, Mumbai. She also completed a Master of Laws (LLM) from the University of Mumbai, Mumbai. She is a lawyer by profession.

Since childhood, Pranutan Bahl wanted to be an actress. Pranutan went to the headlines when actor Salman Khan introduced her through his Twitter account by saying that she would play the lead role opposite Zaheer Iqbal in Nitin Kakkar’s upcoming film, ‘Notebook’.

According to Woodgram, Pranutan Bahl’s estimated Net Worth, Salary, Income, Cars, Lifestyles & many more details have been updated below. Let’s check, How Rich is Pranutan Bahl in 2019-2020? 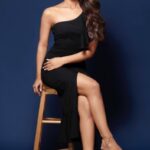 Pranutan Bahl will be seen in the ‘Helmet’ movie with Aparshakti Khurana and Abhishek Banerjee. The film is directed by Satram Ramani and produced by Sony Pictures.

Who is the father of Pranutan Bahl?

How old is Pranutan Bahl?

What is the height of Pranutan Bahl?

Which is the debut film of Pranutan Bahl?

Pranutan Bahl first appeared in the film ‘Notebook’ along with Zaheer Iqbal, which was released on 29 March 2019.