Pablo Escobar is often known as the ‘King of coke’ was a notorious Colombian drug lord. He was considered as the most flagrant, influential, and richest criminal in the history of cocaine marketing. The ‘Medellin Cartel’ was formed by him in collaboration with other criminals to ship cocaine to the American market. The 1970s and 1980s saw Pablo Escobar and the ‘Medellin Cartel’ enjoying near-monopoly in the cocaine smuggling business in the U.S. shipping over 80% of the total drug smuggled in the country. He earned billions of dollars and by the early 90s. His known estimated net worth was $30 billion.

The earnings sum up to around $100 billion when money buried in various parts of Colombia are included. In 1989 Forbes mentioned him as the seventh wealthiest person in the world. He led an extravagant life with the fortune he made. His empire included four hundred luxury mansions across the world, private aircraft, and a private zoo that housed various exotic animals. He also had his own army of soldiers and seasoned criminals. While his vast empire was built on murders and crimes, he was known for sponsoring soccer clubs and charity projects.

Pablo Escobar was a Colombian drug lord whose ruthless ambition, until his death, implicated his wife, daughter, and son in the notorious Medellin Cartel. Pablo Emilio Escobar Gaviria was a Colombian drug trafficker who eventually controlled over 80 percent of the cocaine shipped to the U.S., earning him the rank of one of Forbes Magazine’s 10 wealthiest people in the world. Escobar entered the cocaine trade in the early 1970s, collaborating with other criminals to form the Medellin Cartel. He earned popularity by sponsoring charity projects and soccer clubs, but later, terror campaigns that resulted in the murder of thousands turned public opinion against him.

Pablo Escobar was born on 1 December 1949, in Rionegro, in the Antioquia Department of Colombia. He was the 3rd of seven children of the farmer Abel de Jesus Dari Escobar Echeverri, with his wife Hilda de Los Dolores Gaviria Berrio, an elementary school teacher. Raised in the nearby city of Medellin, Escobar is thought to have begun his criminal career as a teenager, allegedly stealing gravestones and sanding them down for resale to local smugglers. 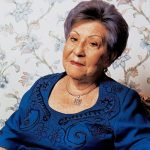 His brother, Roberto Escobar, denies this, instead claiming that the gravestones came from cemetery owners whose clients had stopped paying for site care and that he had a relative who had a monuments business. His son, Sebastian Marroquin, claims his father’s foray into crime began with a successful practice of selling counterfeit high school diplomas, generally counterfeiting those awarded by the Universidad Autonoma Latinoamericana of Medellin. Escobar studied at the University for a short period but left without obtaining a degree. 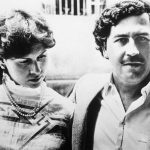 Pablo Escobar With His Wife

He eventually became involved in many criminal activities with Oscar Benel Aguirre, with the duo running petty street scams, selling contraband cigarettes, fake lottery tickets, and stealing cars. In the early 1970s, prior to entering the drug market, Escobar acted as a thief and bodyguard, allegedly earning US$100,000 by kidnapping and holding a Medellin executive for money. He began working for Alvaro Prieto, a contraband smuggler who operated around Medellin, aiming to fulfill a childhood ambition to have COL $1 million by the time he was 22. He is known to have had a bank deposit of more than US$3 million when he was 26.

Height of His Power

By the mid-1980s, Escobar was one of the most powerful men in the world, and Forbes magazine listed him as the seventh richest. His empire included an army of soldiers and criminals, a private zoo, mansions, and apartments all over Colombia, private airstrips and planes for drug transport, and personal wealth reported to be in the neighborhood of $24 billion. Escobar could order the murder of anyone, anywhere, anytime. 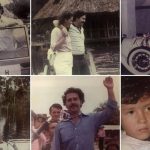 He was a brilliant criminal, and he knew that he would be safer if the common people of Medellín loved him. Therefore, he spent millions on parks, schools, stadiums, churches, and even housing for the poorest of Medellín’s inhabitants. His strategy worked—Escobar was beloved by the common people, who saw him as a local boy who had done well and was giving back to his community. 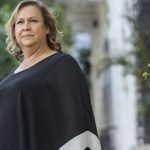 In 1976,  Escobar married 15-year-old Maria Victoria Henao. The couple had two children together: a son, Juan Pablo, and a daughter, Manuela. Today Escobar’s son is a motivational speaker who goes by the name Sebastian Marroquin. Marroquin studied architecture and published a book in 2015, Pablo Escobar: My Father, which tells the story of growing up with the world’s most notorious drug kingpin. He also asserts that his father had committed suicide.

“My father’s not a person to be imitated,” Marroquin said in an Agence France-Presse interview. “He showed us the path we must never take as a society because it’s the path to self-destruction, the loss of values, and a place where life ceases to have importance.”

On December 2, 1993, Colombian security forces—using U.S. technology—located Escobar hiding in a home in a middle-class section of Medellín. The Search Bloc moved in, triangulated his position, and attempted to bring him into custody. Escobar fought back, however, and there was a shootout. Escobar was eventually gunned down as he attempted to escape on the rooftop. Although he was also shot in the torso and leg, the fatal wound passed through his ear, leading many to believe that Escobar committed suicide. Others believe one of the Colombian policemen fired the bullet. 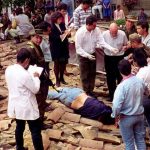 With Escobar gone, the Medellín Cartel quickly lost power to its rival, the Cali Cartel, which remained dominant until the Colombian government shut it down in the mid-1990s. Escobar is still remembered by the poor of Medellín as a benefactor. He has been the subject of numerous books, movies, and television series, including “Narcos” and “Escobar: Paradise Lost.” Many people remain fascinated by the master criminal, who once ruled one of the largest drug empires in history.

[wps_faq style=”classic” question=”Who Shot Pablo Escobar?”]With Authorities Closing In, A Firefight With Escobar And His Bodyguard, Álvaro De Jesús Agudelo (Alias “El Limón”), Ensued. The Two Fugitives Attempted To Escape By Running Across The Roofs Of Adjoining Houses To Reach A Back Street, But Both Were Shot And Killed By Colombian National Police.[/wps_faq]

[wps_faq style=”classic” question=”What Happened To Escobar?”]The Real-life ‘narcos’ Character Led A Mostly Quiet Life. In Narcos, Escobar’s Wife Goes By Tata A Nickname Used For The Drug Kingpin’s Real Wife, Maria Victoria Henao. Escobar And Henao Married In 1976 When She Was 15 Years Old (He Was 26 At The Time) And Remained Together Until His Death In 1993.[/wps_faq]