Nithya Menen is a well-known Indian actress and singer. She mainly appears in Malayalam, Telugu, Tamil, Kannada, and Hindi movies. Menen is famous for portraying the role of Tara in the Tamil movie, O Kadhal Kanmani.  Nithya is the winner of 3 Filmfare Awards for the Telugu films Gunde Jaari Gallanthayyinde, Malli Malli Idi Rani Roju, and the Tamil film Mersal. She has appeared in over 50 movies from supporting roles to lead roles. Nithya Menen was born in a Malayali Family on 8 April 1988 in Banashankari, Bangalore. Not much known about her family. After completing her schooling Nithya attended Manipal’s Manipal Institute of Communication and Bangalore’s Mount Caramel College to study journalism. She actively competed in co-curricular activities in her school days. She was good at dance and singing from a very young age. When Nithya was 10 years old, she landed a role in the English language movie The Monkey Who Knew Too Much in 1998.

Menen began her acting career in 2001 with the TV show Choti Maa…Ek Anokha Bandhan. Then, she appeared as a supporting actor in the Kannada movie at 7 O’Clock in 2006. The 2008 off-beat film Aakasha Gopuram, directed by National Film Award-winning director K. P. Kumaran, marked her Malayalam debut in the leading role in which she was paired with Mohanlal.

According to Woodgram, Nithya Menen’s estimated Net Worth has been updated below:

Nithya Menen featured in the Kannada film, Josh. She played a supporting role in the film, which got rave reviews and became a commercial success. In the year 2011, Nithya’s first release was Nandini Reddy’s romantic comedy Ala Modalaindi, which washer maiden Telugu venture as well. Moreover, Nithya also sang 2 songs for the soundtrack album of the film, tuned by Kalyani Malik. 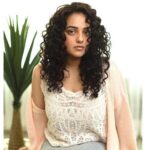 Nithya starred in Santosh Sivan’s historical fiction Urumi as part of an ensemble cast. she next performed in ad-filmmaker Jayendra’s bilingual venture 180/Nootrenbadhu, made and released in Tamil and Telugu in the year 2011, in which she portrayed a photojournalist named Vidhya. In the same year, Nithya was seen in Sibi Malayil’s Violin in Malayalam and the Gautham Menon-produced Veppam in Tamil.

In 2012, Nithya’s first release was the Telugu romance movie Ishq with Nitin Reddy. She appeared in Karmayogi, a Malayalam adaptation of Shakespeare’s Hamlet.  Nithya was seen in 2 Malayalam projects, T. K. Rajeev Kumar’s Thalsamayam Oru Penkutty, in which she played a role of a village woman whose daily life is filmed and broadcast as a reality show for a month, and Anwar Rasheed’s Ustad Hotel.

In the year 2013, Nithya starred in 3 Telugu movies, Okkadine, Jabardasth, and Gunde Jaari Gallanthayyinde, and one Kannada movie Mynaa. Menen starred in 3 Tamil movies in 2016, 24 opposite Suriya, for the first time. In Telugu, she starred in 2 movies, okka Ammayi Thappa opposite Sundeep Kishan & Janatha Garage opposite Jr. NTR. In 2017, Nithya’s only release was a Tamil film Mersal opposite Vijay, which garnered her a Filmfare Award for Best Supporting Actress – Tamil.

In the next year, her first release was Nani’s Production venture an anthology psychological thriller Awe. Nithya’s next release was VK Prakash’s Praana which marks her comeback to the Malayalam industry after 2015’s romantic flick 100 days of love. Menen made her Hindi debut with Mission Mangal alongside Akshay Kumar.

Where is Nithya Menon from?

What is the age of Nithya Menon?

What is Nithya Menon’s height?