Jon Hamm is an American actor known best for his portrayal of Don Draper, a fictional advertising agency in the series ‘Mad Men’, which was set in the 1970s. Hamm was initially a struggling actor and found it difficult to find enough work because his appearance suggested that he was older than he actually was. He waited on tables and worked as a set designer for an adult movie, to make ends meet. Getting frustrated with the lack of good work, he set his 30th birthday as the deadline for grabbing a foothold in the industry. Jon is known for his ability to soften an aggressive character and derive humor in his characters through sheer skill and his gift of acting. Jennifer. He has acted in a number of television and film roles throughout his career.

His portrayal of Don Draper earned him two Golden Globe awards for ‘Best Actor’ in 2008 and 2016. He also received eight Emmy award nominations for his exceptional acting. Some of his television credits include ‘30 Rock’, ‘Parks and Recreation’ and ‘Children’s Hospital. His film credits include movies such as the 2014 film ‘Million Dollar Arm’, ‘Friends with Kids’ and the 2010 crime thriller ‘The Town’ in which he stars alongside Ben Affleck. Personal Trainer: Jon Hamm doesn’t go to the gym to stay fit. He is a sports lover and plays games like tennis and golf. For a 185 pound person, playing tennis for 30 minutes burns around 311 calories. It also strengthens leg muscles. When his relationship with Jennifer Westfeldt was ON, he was eating vegetarian food for the most part as she used to cook the stuff (only vegetarian) at home.

Jonathan Daniel Hamm was born on 10 March 1971. in St. Louis, Missouri. His father, Daniel Hamm, had a family trucking company, and his mother, Deborah, was a secretary. Hamm has two siblings. An older sister named Jennifer Hinze and a younger sister, Julie Schulte.

When Hamm was just two, his parents got divorced. He lived with his mother in St. Louis County in Creve Coeur, Missouri until she died of colon cancer when Hamm was 10. Subsequently, Hamm went to live with his father in Clayton, Missouri. His father passed away when he was 20.
Hamm’s first acting role was Winnie the Pooh when he was in the first grade. Later on at the age of 16, he was selected to play Judas in the play ‘Godspell’.

Hamm taught eighth-grade acting at his high school after graduating with a Bachelor of Arts degree in English in 1993. In a desperate attempt to stay away from a conventional career, he moved to Los Angeles with just his automobile and $150, in 1995.

Hamm’s representatives and agents at the William Morris Agency terminated him as a client because he had failed to obtain any acting jobs for three years and he looked older than his age.
To support himself during this period, he waited on tables and served as a set designer for an adult movie. Eventually getting frustrated with the lack of work, he set his 30th birthday as the deadline for him to make it in the industry.

Jon Hamm’s estimated Net Worth, Salary, Income, Cars, Lifestyles & much more details has been updated below. Let’s check, How Rich is Jon Hamm in 2022? 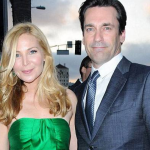 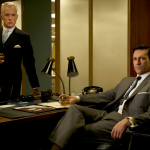 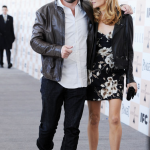 Is Jon Hamm The Voice Of Mercedes Benz?

Who Is Jon Hamm Married To?

Actor Hamm Was In A Relationship With Actress And Screenwriter Jennifer Westfeldt From 1997 To 2015. In An Interview Discussing His Relationship With Westfeldt, Actor Hamm Said: “We May Not Have A Piece Of Paper That Says We’re Husband And Wife, But After 10 Years, Jennifer Is More Than Just A Girlfriend.

How Much Is Jon Hamm Worth?

Jon Hamm Is An American Television And Film Actor Who Has A Net Worth Of $30 Million. Jon Hamm Is Most Famous For Playing The Role Of Don Draper On AMC’s Hit Drama “Mad Men”. Hamm Was Born In St. Louis, Missouri In 1971.

Why Is Jon Hamm Uncredited In Bridesmaids?

Jon Hamm Chose To Go Uncredited As He Felt His Presence On The Credits Would Signify A More Serious Film, Seeing As He, As An Actor, Is Not Generally Recognized For Appearing In Comedies. Jennifer.

How Much Does Jon Hamm Make Per Episode?

Jon Hamm Started Acting Professionally In The ’90S, But He Is Most Famous For His Role As The Main Character On “Mad Men,” Don Draper. Jennifer Celebritynetworth Reports The Actor Is Worth $30 Million And Makes $275,000 An Episode. In 2012, Hamm Reportedly Negotiated An eight-figure Contract With The Series.