Hansika Motwani is an Indian actress who mainly appears in Tamil films. She also acts in Telugu, Malayalam, Kannada and Hindi films. She made her film debut in the Telugu film Desamuduru (2007), winning the Filmfare Award for Best Female Debut – South. She then appeared in a couple of high-budget Telugu movies, including Kantri (2008) and Maska (2009) . Hansika Motwani is born to Pradeep Motwani, a businessman, and Mona Motwani, a dermatologist. She has a brother Prashant Motwani. Her mother tongue is Sindhi and she is a Buddhist. She was born in Mumbai.

Hansika attended the Poddar International School in Mumbai. She went on to study at the International Curriculum School in Santacruz, Mumbai. As a child, she lived in the same apartment as Bollywood actor Varun Dhawan.

Hansika is one of the leading actresses of the Indian movie industry. She has an estimated net worth of $2 million, which she earned from acting and commercials. She has appeared in commercials of Nirma and Saravana Stores.

Hansika began her television career with a serial called Shaka Laka Boom Boom. She later acted in the Indian serial Des Mein Nikola Hoga Chand, for which she received the Favorite Child Award at the Star Parivaar Awards, and appeared as one of the children in Koi Mil Gaya with Preity Zinta and Hrithik Roshan.

Hansika made her debut at the age of 16 in a lead role in Puri Jagannadh’s Telugu film Desamuduru, opposite Allu Arjun, earning the Filmfare Award for Best Female Debut – South for her performance. Hansika made her debut as a leading actress in Bollywood with Himesh Reshammiya in Aap Kaa Surroor — a moderate hit. She next signed the Hindi film titled He: The Only One, where she was to essay the role of a killer, hell-bent on taking revenge for her family, but the film was later shelved.

Hansika’s first 2008 release was Bindaas, starring Puneet Rajkumar, her first and only Kannada film to date. Later that year, she was paired with Jr. NTR in the film Kantri. 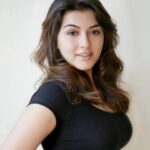 She made her Tamil film debut in the successful 2011 film Mappillai, opposite Dhanush. Her next Tamil film, Engeyum Kadhal, opposite Jayam Ravi, was also successful. The 2011 film Velayudham, in which she starred alongside Vijay, became a box-office success; this was her first time playing the role of a village belle.

In 2012 Hansika had two releases, one in Tamil and Telugu each. Her first release was M. Rajesh’s romantic comedy Oru Kal Oru Kannadi, which became her first runaway hit and earned her positive reviews from critics for her performance. In Telugu, she was featured in Denikaina Ready, opposite Vishnu Manchu, which also earned a positive response from the public. She received her first Best Actress nomination at the 60th Filmfare Awards South for her performance in the film. In 2013, she appeared in four Tamil films, Settai, opposite Arya, Sundar C.’s Theeya Velai Seiyyanum Kumaru, opposite Siddharth, Hari’s Singam II starring Suriya and Venkat Prabhu’s Biriyani with Suriya’s brother, Karthi. She had five releases in 2014, two of them being Telugu films, the comedy flick Pandavulu Pandavulu Thummeda and the action-masala Power. Her Tamil releases were the fantasy film Maan Karate, Sundar C’s horror-comedy Aranmanai and the action thriller Meaghamann, with the former two becoming two of the most profitable films of the year.

Aambala, her third collaboration with Sundar C, was her first 2015 release. She will next be seen in Vaalu with Silambarasan, with whom she was supposed to act in the gangster film Vettai Mannan as well, which was stalled.

In 2015, her movie Romeo Juliet with Jayam Ravi, Poonam Bajwa, VTV Ganesh, Vamsi Krishna, Uma Padmanabhan and Arya (Cameo Role) directed by Lakshman released on 12 June 2015. It opened to mixed reviews and was a profitable venture at the box office. Hansika received praise from critics for her performance in the film. The magnum opus film Puli was not successful financially. 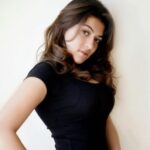 In 2016, Aranmanai 2 directed by Sundar C. released to mixed reviews. She had a list of flops later that year, including the romance Uyire Uyire and Pokkiri Raja. Her last release in 2016 was Manithan in which she played a teacher. She was paired opposite Udhayanidhi Stalin for the second time. She won praise for her depiction of Priya as she wore limited makeup and acted in a role different from her previous glam doll roles.

Bogan was her first release in 2017 and it opened to positive reviews. She was paired opposite Jayam Ravi for the third time. Many critics praised Motwani for her performance in the introduction scene and the pre-climax scene. She also acted in a Telugu film Luckunnodu. Motwani’s Malayalam debut Villain alongside Mohanlal, Vishal, and Raashi Khanna opened to mixed reviews in 2017 but her performance was praised. Goutham Nanda opened to mixed reviews with her short role was not well-received by critics.

Her first release of 2018 was Gulebakavali opposite Prabhu Deva in which she played a con artist named Viji. Although the movie opened to mixed reviews, it fared well in the box office and earned Motwani praise for her role. She would next appear in Thuppaki Munai starring Vikram Prabhu and an untitled Tamil film with Atharvaa directed by Sam Anton.

At the peak of her career, Hansika became the second actress after Kushboo to idolized as a living human goddess.

Hansika is involved in philanthropic activities. She provides monetary support for the education of 25 underprivileged children and also takes care of the medical needs of 10 women affected with breast cancer. She is the Brand Ambassador of ‘Chennai turns Pink’, an awareness program to promote breast cancer awareness among urban women.

In 2014, she was featured in Forbes’ list of 250 celebrities that make it to the 100 Most Influential Celebrities nominees list.

Some Known Facts About Hansika Motwani