Bhumi Pednekar is a well-known Indian actress and model. She is predominantly working in the Hindi film industry. Bhumi came into the spotlight from her debut in 2015 with ‘Dum Laga Ke Haisha’ alongside Ayushmann Khurana. She was working as an assistant casting director at Yash Raj Films for six years before making her acting debut.

Bhumi Pednekar was born in a Hindu family on 18 July 1989 in Mumbai. She comes from a mix of culture as her father Late Satish Pednekar is a Maharashtrian and mother Sumitra Pednekar a Haryanvi. Bhumi has a twin sister, Samiksha Pednekar, who is a lawyer. There is a rumor that Bhumi and and actor Jackky Bhagnani are dating each other. Bhumi Pednekar attended Mumbai’s Arya Vidya Mandir School and went to Communication & Media Arts, Mumbai to complete her graduation. However, Pednekar was expelled from the institute due to poor attendance. Next, she got herself enrolled in the University of Mumbai to pursue a Bachelor of Commerce (B.Com.). Bhumi wanted to be an actor since she was 12-year-old.

At the age of 18, she came to know about the vacancy at Yash Raj Films. Delighted by the idea of being around the cinema, she applied for the post. Initially, she was rejected for the post, but, after a month, Bhumi was called to join as an assistant casting director at Yash Raj Films. Bhumi served as the assistant casting director for 6 years before venturing into acting. Pednekar also attended Whistling Woods International Institute of Film to learn acting.

Pednekar made her acting debut with Sharat Katariya’s romantic comedy Dum Laga Ke Haisha (2015). Starring opposite Ayushmann Khurrana, she featured as Sandhya, an overweight woman who marries Khurrana’s character. In preparation for the role, Pednekar gained close to 12 kg, despite being slightly overweight before filming commenced.

According to Woodgram, Bhumi Pednekar’s estimated Net Worth, Salary, Income, Cars, Lifestyles & many more details have been updated below. Let’s check, How Rich is Bhumi Pednekar in 2019-2020?

In 2015, Pednekar appeared in Y-Films’s mini web-series Man’s World. The four-part series about gender inequality was digitally premiered on YouTube. After a year-long absence from the screen, Pednekar appeared in the social problem film Toilet: Ek Prem Katha (2017), alongside Akshay Kumar, which tells the story of a young woman in rural India who insists on the eradication of open defecation. 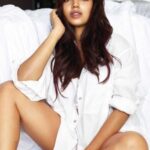 Pednekar followed the success of Toilet: Ek Prem Katha with Shubh Mangal Saavdhan (2017). Her sole screen appearance of 2018 was in Zoya Akhtar’s segment in the Netflix anthology film Lust Stories (2018), in which she played a maid who has an affair with her employer.

Abhishek Chaubey’s crime drama Sonchiriya was Pednekar’s first release of 2019. She played a young housewife on the run in rural Chambal, alongside Sushant Singh Rajput and Manoj Bajpayee. She next starred as the septuagenarian sharpshooter Chandro Tomar in Tushar Hiranandani’s biographical film Saand Ki Aankh, opposite Taapsee Pannu who played her sister-in-law Prakashi Tomar.

Continuing her portrayals of headstrong small-town women, Pednekar starred in Bala and Pati Patni Aur Woh (both 2019). Pati Patni Aur Woh was a remake of the 1978 film of the same name, co-starring Kartik Aaryan and Ananya Panday. She played Vedika, a housewife with a philandering husband. Also in 2020, Pednekar had brief roles in the comedy-drama Shubh Mangal Zyada Saavdhan and the horror film Bhoot – Part One: The Haunted Ship.

How did Bhumi Pednekar lose weight?

She washes down her lunch with either a glass of buttermilk with salt and Jeera or a bowl of homemade Dahi. But we all know that the same style of food every day can get boring. For that, Bhumi has some healthy alternatives like a Grilled chicken with brown bread and veggies.

Which is the best movie in the Hindi film actress Bhumi Pednekar?

The best Bhumi Pednekar movie so far has been her debut film “Dum Laga Ke Haisha” (2015).

Who is a more bold actress, Bhumi Pednekar Or Alia Bhatt?

Bhumi Pednekar, Have a look at her Instagram. She posts really nice picture. Take the example of her first film. She played a fat confident girl and there are purity, boldness, and confidence in her character that make her character perfect.

Why is there a lot of criticism on the brown face of Bhumi Pednekar from the film “Bala” in 2019?

It’s not the dark skin that is being criticized. It’s Bollywood’s nonsense that is being criticized again. If the character was supposed to be a dark skin girl. Filmmakers would have trouble finding a dark-skinned talent instead of doing probably one of the worst makeup jobs on Bhumi Pednekar. First Bhumi was criticized for playing the older woman in Saand Ki Aankh when netizens wished to see more talented and older actresses getting this opportunity to play the character, but filmmakers decided to use the trending names of Bollywood.