Karthika Menon, is an Indian film actress, who works in the South Indian film industry. She has acted in Malayalam, Tamil, Kannada, and Telugu language films, and has established herself as a bankable lead actress. Bhavana was born as Karthika Menon on 6 June 1986 in Thrissur district, Kerala, as the daughter of Pushpa and assistant cinematographer G. Balachandran. She has an elder brother, Jayadev. She studied at Holy Family Girls’ High School, Chembukkavu, Thrissur.

Bhavana has described herself as a restless person and someone who’s “hard to handle”. She grew up with a dream to become an actress. As a five-year-old, she used to imitate actress Amala’s scenes from the Malayalam film Ente Sooryaputhrikku in front of the mirror and was even willing to jump from a building and break her arm, like Amala’s character, did in the film.

On 17 February 2017, she was kidnapped and molested by a gang while traveling from work. The incident happened at night when she was moving from Thrissur to Kochi in her car when a van hit from behind near Athani, Angamaly. A brawl ensued between her driver Martin and the three van passengers, after which they pulled him aside and forcefully entered her vehicle keeping her hostage. 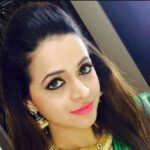 They drove for two-and-a-half hours in the city, during which they sexually assaulted her and took pictures and filmed. They dropped her near Kakkanad and ran away. Bhavana filed a case with the police. The FIR was registered with allegations of rape, criminal intimidation, criminal conspiracy, and breaches of relevant sections of the IT Act of India.

Bhavana Net Worth and Lifestyle

Being one of the leading actresses of the Mollywood, Bhavana has earned a huge name and fame for her. She has an estimated net worth of $3 million, which she makes from acting, modeling, and commercials. Her remuneration is around INR 30-40 lakh per flick.

At age 16, she debuted in the Malayalam film Nammal taking the stage name Bhavana (Malayalam ഭാവന “enlightenment, imagination”) opposite newcomers Sidharth Bharathan, Jishnu, and Renuka Menon. The film was a big success and she got several offers in Malayalam. She won many honors and a Kerala State Special Jury Award for the film. Bhavana was an 11th Standard student when she got her to break in the film.

In 2010, she starred in her first Kannada film alongside Puneeth Rajkumar, Jackie which was a blockbuster. Following the film’s huge success, the film was dubbed into Telugu and Malayalam. Bhavana was said to star with Emraan Hashmi and Amitabh Bachchan in a Bollywood film. 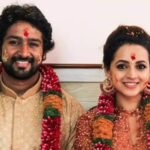 Bhavana With Her Husband

Her second Kannada film Vishnuvardhana with Sudeep opened to a big response. She appeared in the Malayalam films Ozhimuri and Trivandrum Lodge in 2012, and Honey Bee and Ezhamathe Varavu in 2013. She played Roshni Mathew, a single mother employed in an IT company, in Shyamaprasad’s Ivide, a crime thriller based on the serial killing of IT techies in major US cities.

In 2016, she starred in a film with Benedict Doray. Upcoming films of Bhavana include Swapnathekaal Sundaram and Adventures of Omanakuttan. Swapnathekaal Sundaram, touted to be an “out-and-out family entertainer”, will see her portraying a housewife and mother to a 9-year-old boy, while Adventures of Omanakuttan will feature her as Pallavi, a flamenco dancer.